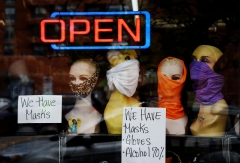 Mannequin heads wear masks in the window of a small boutique advertising availability of masks, gloves, and other pandemic necessities amid the Coronavirus outbreak in Arlington, Virginia, on April 27, 2020. (Photo by OLIVIER DOULIERY/AFP via Getty Images)

(CNSNews.com) - Businesses that are paying more than $15 an hour are finding it hard to hire workers, because right now unemployment benefits are exceeding that amount, Sen. James Lankford (R-Okla.) told Fox Business’s “Mornings with Maria Bartiromo” on Wednesday.

The senator said there won’t be Republican support for President Joe Biden’s $2 trillion infrastructure bill, which according to Moody’s Analytics, adds 2.7 million jobs at a cost of $852,000 per job.

“Eighty percent of their ‘infrastructure package,’ and this is to actually increase jobs is their statement. Again it's government jobs. It’s taking tax dollars and trying to be able to create different work around it as you mentioned for a very large amount per job,” he said.

“Let me tell you the frustration that I heard. The last two weeks I was at home before and after Easter, traveled all around my state, talked to lots of employers,” the senator said.

“They literally say, I always know I'm competing for labor, trying to put a good price out there for labor to be able to appeal to people to come. Now I'm having to compete with the government as folks are saying I can make more staying at home on unemployment than I can actually make coming into work,” Lankford said.

“So we have restaurants, convenience stores, manufacturing locations, all that pay more than $15 an hour, all saying government benefits now exceed that amount, and they can't get workers to come in, so we have shorter hours, and the supply chain is breaking down, because lots of manufacturing locations can't keep up with their orders right now, because they can't get enough labor to help,” he said.

“So, I struggle with them saying I’m going to create jobs when on the other side, they have done a tremendous amount to diminish the growth of our economy,” Lankford said.

When asked whether the Senate can block the infrastructure bill, substantially reduce it, or remove the tax increases, Lankford said, “So, we'd have to have a couple of Democrats at least that would step forward and say we're not going to move on things in a just straight partisan basis, so that's the first long shot that you've got.

“The second one is the Democrats found out quickly in their COVID bill there are a lot of things that don't match reconciliation they want to be able to cram in. They tried to do a $15 an hour minimum wage requirement in the ‘COVID bill,’ and they found out that doesn't pass muster with the parliamentarian. They’re gonna find the same issues with infrastructure,” he said.

“There's been real conversation among Democrats that they’ll try to do reconciliation with immigration reform, so they can open up even more on immigration, do that for reconciliation. You can't do that," Lankford said.

"Reconciliation is based on tax and budget policy, and it has to have a priority on that, and so the focus right now is really within the parliamentarian to be able to speak to Democrats to say you're trying to ram through things that can't go through in this budget process," he added.

“If they try to put it through in the budget process the problem is, it's sloppy, because they can't add policy to it, and so it makes it really difficult to be able to manage those policies or just turns it all over to the administration and says Congress is not going to speak on this. We're just going to hand all this money to the administration, and they decide, which makes a bad situation even worse. So reconciliation is not the end all," the senator said.

Lankford said that Sen. Joe Manchin (D-W.Va.) “has said publicly that Democrats need to stop trying to be able to ram everything through and start actually doing what the American people asked to do and that's to be able to work together.”

“I'll remind everyone we did five COVID bills all in a bipartisan basis last year. It's not that it can't be done. It's that they're not even trying. The Democrats are literally not even trying to be able to reach across the aisle on all these issues,” he said.

“They step up and say Republicans won't talk to us but actually, it's literally the opposite, and a very willing media is just letting it all go without actually challenging it at all so at this point unless Joe Manchin and Kyrsten Sinema and some of those step forward and say we've got to do bipartisan work, it continues to be rammed through,” the senator said.

Lankford said he doesn’t think that Democrats will remove the filibuster, because Sens. Manchin and Sens. Kyrsten Sinema (D-Ariz.) “will hold solid on that and HR 1, we’ll continue to be able to block because that actually makes voting easy and cheating easy. We need to make voting easy and cheating hard. That's a better way to do it and keep it in state control.”