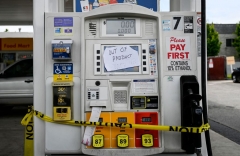 Out of order notes are left on gasoline pumps to let motorists know the pumps are empty at a Shell gas station in Woodbridge, Virginia on May 12, 2021. (Photo by ANDREW CABALLERO-REYNOLDS/AFP via Getty Images)

Rep. Jim Jordan (R-Ohio) said that “in a little over 100 days, we went from a secure border to a crisis.”

“We went from energy independence to the lines at the pump, and now we went from peace in the Middle East to hundreds of rockets fired by terrorists on our best ally - actually over 1,000 rockets being fired on our best ally, Israel,” the congressman said.

"This is exactly what happens, as you said, when we project weakness from the Oval Office. It is not a good situation, but the American people see it for what it is, and that's why they are demanding change, and I think as we look ahead, frankly, you're going to see the Republicans take back the house next year because of all the turmoil they see coming as a result of this administration's policy,” he said.

Host Sean Hannity pointed out that because of the Colonial Pipeline ransomware attack, gas stations along the East Coast are running out of gas, therefore, people will pay more at the grocery store, drug store, even Home Depot, and especially now at the pump.

“That means we are going to pay more for everything, and we’ll pay more for filling up the gas in our cars or trucks and heating and cooling our home. That would be an unmitigated disaster. Joe said he was not going to do this to the American people, but that's the net result of his policies,” Hannity said.

“And he also said he's not supposed to be answering questions. Are you kidding me? Joe Biden, you're the president of the United States. You owe it to the American people to talk to us about what is going on. You got us into a disastrous situation and as Congressman Jordan just pointed out, in 100 days, we have gone from some of the best times in the history of America under Donald Trump,” Lara Trump said.

“Don't forget it was President Donald Trump that not only gave us energy independence. We were a net energy exporter. We had some of the lowest on unemployment numbers in the history of our country. We had far more jobs than we had people to fill them and now we are here - lines of the pump, people fighting for gas,” she said.

“Gosh, I don't know, Sean, it feels terrifyingly close to something called socialism, full reliance on the government not giving what people what they need unless the government can provide it. We’re giving handouts to people. They don't want to get jobs. It is terrifying to see, and one person needs to answer for this. It's Joe Biden, he better start answering some questions,” Lara Trump said.

Jordan said that the United States better stand behind Israel.

“That is so right, and it's really sad to see how quickly that has slipped away. People knew when President Trump was in office you don't mess with Israel, because guess who’s right behind Israel should you decide to do that, the United States of America, and now it feels like a very different situation,” Lara Trump said.

“Where are we helping out our ally? Where are we in this? Where is Joe Biden, the president of the United States? Shame on him for allowing this to happen. We better get this together. This is disgraceful,” she said.