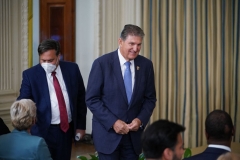 Senator Joe Manchin (D-WV) attends a signing ceremony for H.R. 5376, the Inflation Reduction Act of 2022, in the State Dining Room of the White House in Washington, DC on August 16, 2022. (Photo by MANDEL NGAN/AFP via Getty Images)

(CNSNews.com) – Sen. Joe Manchin (D-W.Va.) said Tuesday that the Inflation Reduction Act that he voted for, which was touted as a way to reduce inflation, won’t “immediately” reduce inflation.

In a letter to the Congressional Budget Office on July 28, Sen. Lindsey Graham (R-S.C.) asked what impact the Inflation Reduction Act will have on inflation this year and next year.

CNN White House Correspondent Kaitlan Collins asked Manchin, “You long said inflation was a concern of yours, but the Congressional Budget Office said it’s not really going to do a lot to reduce inflation this year, maybe a little bit next year, so how do you make sure the bill lives up to its name?”

Manchin dismissed the CBO assessment, saying, “They haven’t always been always right, sorry to tell you.”

“The bottom line is if you are paying down debt, let me say that you’re my banker, I come and I pay my debt-- I pay in advance, I’m showing good faith. It gives you confidence in that, and basically, it puts confidence in the market,” the senator told reporters outside the White House after President Joe Biden signed the bill into law.

“Next of all, we have that whole thing about our--- for the pricing for Medicare. We tried to go across the board $35 as far as a cap, and my Republican friends challenged that one within the Byrd rule too and took that out for the private sector. They couldn’t for the public sector, because we were overdue with Medicare. Then they put the $2,000 cap, said that’s reducing – everything we’re doing is reducing the cost of individuals to burden with, and how they said that’s not going to help inflation, I have no idea,” he said.

“Next of all, the amount of investment’s going to be made, whether it be in building the pipelines or building the new clean technology, the investments with nuclear and everything that we’re doing with the storage, I just pray to goodness we can find all the people that do all the jobs that we need over the period of time.  So we have the bipartisan infrastructure bill. Then you got this thing coming right back. There’s going to be a tremendous demand on that, so I think that should work,” the senator added.

MANCHIN: Why would it? Well, Immediately it’s not. We never said anything happened immediately, like today, it’s turn the switch on and off.

This transition’s happening, and climate’s real, and we’re responsible. I come from West Virginia. We’re responsible too. We all know that, but the bottom line is we have a large coal industry, and we have natural gas, but if we transition, we want to do it in the most cleanest way possible, the technology.
That’s going to be helping something. If I can get your utility prices down, that’s fighting inflation. This winter, wherever you may live, I know in West Virginia winters get pretty cold, people are concerned, and gasoline prices have come down quite a bit.

We want to get them back down to that $2 range. We’re fighting like the dickens. You gotta produce yourself out of this. If you think that you’re going to wait on the Federal Reserve to raise the rates and discourage you from buying anything, and that’s going to take care of our inflation, that’s not how you take care of inflation.

REPORTER: But on that, I mean inflation is still high--

REPORTER: Does it make sense to ask people to spend a lot of money to weatherize their home, to put solar panels on their home, buy an electric vehicle to then cash in on these tax credits?

MANCHIN: They have 10 years. There’s 10 years. It’s not like it’s going to be overnight. They have incentives to do that, to help them. Trust me, as you have something going bad in your home, and you’re replacing it, and you have some assistance you’re thinking that may be of some help.

There’s another part of this bill. There’s $4 billion in this bill that you all might not know about that goes to help the drought, the western drought, and that’s basically trying to convince people not to use the amount of water they’ve been using in order to have the water that’s going to be needed for survival.