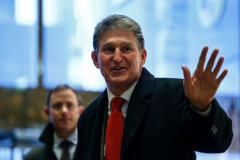 Senator Joe Manchin leaves after a meeting with US President-elect Donald Trump at Trump Tower December 12, 2016 in New York. (Photo by KENA BETANCUR/AFP via Getty Images)

(CNSNews.com) - Sen. Joe Manchin (D-W.Va.) said Tuesday that the Democratic proposal for banks to report the inflows and outflows of bank accounts that total more than $10,000 a year is “screwed up” and won’t be in the final reconciliation package.

Speaking at the Economic Club in Washington, D.C., Manchin said he told President Joe Biden during their meeting on Sunday, “I said, ‘Do you understand how messed up that is to think that Uncle Sam is going to be watching?’"

“I said, Mr. President, I don't know what happened. This cannot happen. This is screwed up," he said.

Fox News White House Correspondent Jacqui Heinrich asked White House Press Secretary Jen Psaki whether it’s try that both proposals are out of the negotiation over the reconciliation bill at this point.

HEINRICH: Seeing some reports - not sure if it’s out there, probably you can clarify that the billionaire’s tax and IRS enforcement might be out of the negotiation at this point. Can you say whether that’s true, and also how can the administration say that this is paid for if that change happens?

PSAKI: I would say on the billionaire’s tax, which is one of the ideas that has been part put forward and has been part of the discussion - I don’t have an update on this moment on the status, but it’s possible changes could be made as they have been to all components of the-- many of the revenue raisers and tax fairness components.

I would say this will actually be paid for, because there are a range of options out there that would more than pay for what we’re talking about. That includes the corporate minimum tax, imposing a 15 percent minimum tax. It includes the global minimum tax.

It includes closing loopholes for high-income Americans, and it also includes investing in enforcement, so I think there’s been some reporting - just for clarification - on reporting mechanisms, which is not the same as the IRS enforcement component, which is going after tax cheats who are evading paying taxes, which many outside experts have estimated amounts to about $160 billion in taxes a year.

So there’s been some reporting about the reporting components and the caps on those. That’s been an ongoing discussion, but there is no disagreement about going after tax cheats.

HEINRICH: So is having it paid for then a requirement for the president and the White House in order to get this thing passed?

PSAKI: The president’s been pretty clear that he believes that making the tax system more fair, that ensuring we are taking the opportunity to do that is a part of this package and what he expects to sign into law.