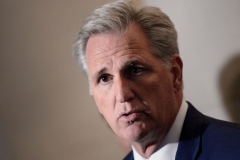 (CNSNews.com) - House Minority Leader Kevin McCarthy (R-Calif.) called out House Speaker Nancy Pelosi (D-Calif.) on Thursday for raising money to bail out protesters and visiting California to see the wildfires but not visiting the sheriff’s deputies who were shot on Saturday.

McCarthy began his Capitol Hill press conference on Thursday by condemning the ambush.

“I”m not sure if my hometown senator (sic) … has condemned it or done anything about it. I know she went out to California to see the fires. I wish she would stop and see the sheriffs as well. I’m not sure if she raised money for a reward to find who did this. I know she raised money to bail out the rioters. I know also that 13 of those staff members on Joe Biden’s campaign did as well, not sure if they’re still on his campaign, but I have not heard whether they left,” he said.

“I know you just had a press conference with the speaker of the House. .. I don’t know if you asked her about the ambush - the shooting of those two sheriffs, but I know when she was asked before, she said, ‘People will do what they do.’ I’m not sure if she changed her opinion or condemned the action as well. Maybe that’s a question you could ask her,” he said.

At least 13 several Biden staffers donated to the Minnesota Freedom Fund, a group which opposes cash bail to avoid being jailed before trial.. The fund used donations to pay bail fees in Minneapolis.

McCarthy said that the Democratic leadership under Pelosi “has to be one of the weakest congressional terms in history.”

“They carried out the most partisan, rushed impeachment in U.S. history. Chris Rock has said focusing on impeachment they let the pandemic come in. They support defunding our police and shrinking our military budget, and they have repeatedly delayed relief for the American people,” he said.

McCarthy also blamed Democrats for the 100,000 businesses that have closed permanently since the pandemic because they didn’t get needed financial relief in time.

“The Democrats’ failures continue. This week we learned 60 percent of the businesses that shut down during the pandemic, nearly 100,000 businesses have closed permanently. Now as Republicans, we tried to use the so-called emergency session back in August to help our small businesses and replenish them with the successful Paycheck Protection Program,” he said.

“We made that when Speaker Pelosi called us back for that emergency meeting on the post office. You know prior to our departure where she said we would not leave until we had a COVID relief bill, and seeing none would come to the floor to the majority, we used the motion to recommit to do that. Unfortunately, the Democrat majority voted it down,” McCarthy said.

"Americans still need relief for the economic fallout of this pandemic response. Congressional Republicans have come to the table with a targeted proposal. Democrats continue to delay COVID relief to pursue an unrelated liberal agenda,” he added.