McCarthy: ‘I Think the Administration Got an Indication It’s Going to Be Different’ with GOP-Led House 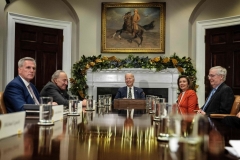 (CNSNews.com) – House Minority Leader Kevin McCarthy (R-Calif.) said Tuesday that during a meeting with congressional leaders at the White House, the Biden administration got a sense that it’s going to be different dealing with a Republican-led House in January.

The Republican leader told reporters at the White House that he invited President Biden to visit the southwest border with him.

I explained to the president. He asked me about the border, so I told him about my current trip. Just in El Paso in one overhang of a freeway, 70,000 people have come across in the last seven weeks. If we would send people back to the country that they came from, the border agents would tell you they stopped coming.

The border agents themselves are cut short that there's not enough of them, that they're sitting and working the job as processing where you could have somebody else with that job so they could be out front. I explained to the president what I saw, where you can see videos of these cartels literally shooting tracers at our National Guard.

A woman hung because she didn't pay the cartel, her feet cut off, put on fire that the cartels controlling as you watch them across, but also explain to him what's happening when it comes to fentanyl. There's not just any city. Every city today is now a border city. Your affinity with Bakersfield now. In our own junior high, a junior high [student] at the age of 13 brought 150 fentanyl pills to school.

It's killing our youngest generation from 18 to 45, the number one factor coming from China making these cartels wealthy. So you've got to lean on President Xi. You've got to stop the cartels and my expression to the president was it is a different situation now that it's become so bad that we need to have our own military embedded with the border agents to be able to be on the level competing with these cartels and what they have done? The control of our border is lost right now.

That is why I asked Homeland Security Secretary to resign, and come January 3rd, we'll have an investigation of why the border has become the situation it is and not allow them to continue along the same path.

McCarthy explained that during the meeting with the president, he explained that he “can work with anyone who's willing to work to get our spending under control to work to make America energy independent, to secure our borders.”

He said that continuing resolutions (CRs) “are not where we want to be, but if we cannot get our work done now, the outgoing majority, if they don't want to work with us, we can get this work done in January as well” when the Republicans take over.

“We had an in-depth conversation about the security of the border and fentanyl coming across killing our younger generation, ways that we can make energy in our natural gas, be able to produce more to help those in Europe, our allies and others, and ways that if it is possible to work together, get our spending in control because of how much has been wasted throughout,” McCarthy added.