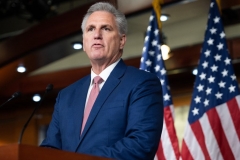 (CNSNews.com) – House Minority Leader Kevin McCarthy (R-Calif.) said Thursday that if the Republicans regain a majority in the House, the first thing he will do is talk about lowering prices for the American public and how to put food back on the shelves at the grocery store.

Speaking at a Capitol Hill press conference, McCarthy was asked what kind of oversight will he conduct as the majority leader.

“How often have we gone after people's phone records?” McCarthy said.

“You know what we will do if we are entrusted with the majority? The first thing that we will do is talk about how do we lower the prices for the American public? How do we make gasoline price affordable again? How do we put food back on the shelves and how do we stop this rise of inflation and prices of everything that you are dealing with?” McCarthy said.

“How do we secure the border? How do we stop government mandating and controlling our lives? How do we make cities safe again? And yes, we will hold this administration accountable. We just found this week. I sent a letter with Virginia Foxx, the secretary of education, asked the national school board to send them a letter so that he can go to attorney general to now investigate the parents who go to school board meetings of terrorism,” he said.

“Afghanistan. We have 13 new Gold Star families, and that never had to happen. How many Americans are still stuck there? Have any of you asked that question? The president said just weeks before that he would not leave until every American was gone,” the minority leader said.

“The taxpayer who bought all of that weaponry that the Taliban now has. You got any reporting and recording of where that is? Where is it being sold to now on the black market? IRS releasing Americans' tax returns. Yes, we can do both, and we will,” McCarthy said.