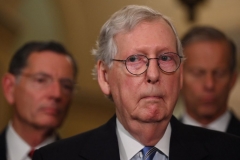 Speaking on the Senate floor on Wednesday, McConnell said that the same man who spoke about uniting people and uniting the nation “delivered a deliberately divisive speech that was designed to pull our country further apart.”

“Twelve months ago, this president said we should see each other not as adversaries but as neighbors. Yesterday he called millions of Americans his domestic enemies,” the Senate Republican leader said.

“Twelve months ago the president called on Americans to join forces, stop the shouting, Lower the temperature, but yesterday he shouted that if you disagree with him you’re George Wallace. George Wallace. You don't pass the laws he wants you’re Bull Conner, and if you oppose giving Democrats untrammeled one-party control of the country, well you’re Jefferson Davis,” he said.

“Twelve months ago, this president said disagreement must not lead to disunion, ah, but yesterday invoked the blood withy disunion of the Civil War, the Civil War. To demonize Americans who disagreed with him, he compared – listen to this - a bipartisan majority of senators to literal traitors. How profoundly, profoundly unpresidential,” McConnell said.

The minority leader said that while he has “known, liked and personally respected” Biden for many years, he did not recognize “the man at the podium yesterday.”
McConnell pointed out that Biden was not given a mandate by voters, because “he got a tied Senate, negative coat tails in the House, narrowest majorities in over a century.”

The president did not get a mandate to transform America or reshape society, but he did arguably get a mandate to do just one central thing that he campaigned on. Here’s what that was - bridge a divided country, lower the temperature, dial down the perpetual air of crisis in politics. That is the one central promise that Joe Biden made. It is the one job citizens actually hired him to do.

It is the one project that would have actually been consistent, consistent with the Congress the voters elected, ah, but President Biden has chosen to fail his own test. The president's rant, rant yesterday was incoherent, incorrect, and beneath his office. He used the phrase Jim Crow 2.0 to demagogue a law that makes the franchise more accessible than in his own state of Delaware.

He blasted Georgia's procedures regarding local elections officials while pushing national legislation with almost identical language on that issue. The president implied things like widely popular voting ID laws to be quote - listen to this – totalitarian, totalitarian?

Ironically on the same day the Washington, D.C.’s Democratic mayor told citizens to bring both a photo I.D. and vaccine card any time they leave the house. The president repeatedly invoked the January 6th riot while himself using irresponsible delegitimizing rhetoric that undermines our democracy. The sitting president of the United States compared American states to totalitarian states.

He trampled through some of the most sensitive and sacred parts of our nation's past. He invoked times when activists bled and when soldiers died, all to demagogue voting laws that are more expansive than what Democrats have on the books in his own home state.

McConnell pointed out that Biden’s home state of Delaware has fewer early voting days than Georgia and that if Georgia and Texas are considered to be “Jim Crow 2.0” then so do a lot of Democrat-run states. He also asked if “democracy is on death’s door” like the president claims, what took him so long to address it?

Georgia has more days of early voting days than Delaware or New York. Georgia has no excuse absentee voting, which Delaware and New York do not have. If Georgia or Texas present Jim Crow emergencies, then so do a whole lot of Democratic-run states. The Senate Democratic leader has gone on cable TV and saying Georgia is greatly restricting or eliminating early voting. That's a lie, provably false.

So, take a step back for a minute. President Biden's story is that democracy is on death's door, but he spent nine months chasing a reckless taxing and spending spree before addressing it? Must not be that much of an emergency.

Citizens are meant to believe a return of Jim Crow is on the table, but this is only president Biden's sixth priority after he was blocked from spending $5 trillion on windmills and welfare. Democrats' own behavior refutes their false hysteria.

Twelve months ago, the president said if politics need not be a raging fire destroying everything in its path. That was just 12 months ago, but yesterday he poured a giant can of gasoline on the fire. Twelve months ago, the president said every disagreement doesn't have to be a cause for total war, but yesterday he said anyone who opposes smashing the Senate, smashing the Senate and letting Democrats rewrite election law is a domestic enemy, and listen to this, a traitor like Jefferson Davis.

McConnell used Biden’s rhetoric as a prime example of why the filibuster is necessary and why the “framers” created it “to check his power.”

One week ago President Biden gave a January 6th lecture about not stoking political violence, one week ago. Yesterday with the world's largest megaphone he invoked the literal Civil War and said we are on the doorstep of autocracy? Talked about domestic enemies? Rhetoric unbecoming of a president of the United States.

A president shouting that 52 senators and millions of Americans are racist unless he gets whatever he wants is proving exactly why the framers built the Senate to check his power. This whole display is the best possible argument for preserving, preserving the Senate rules that extend deliberation, force bipartisan compromise and let cooler heads prevail. Nothing proves it better than this episode. It offers a perfect case study in why Senator Biden was right about the filibuster and President Biden is wrong.

One respected scholar explained it this way: The smallest majority we’ve ever seen in our politics is trying to change the rules for how people get elected in every single state. That’s just about the best argument for the filibuster you could ever imagine.