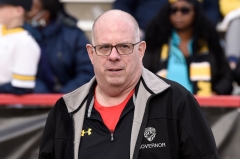 Maryland Governor Larry Hogan on the sidelines before the game between the Maryland Terrapins and the Michigan Wolverines at Capital One Field at Maryland Stadium on November 20, 2021 in College Park, Maryland. (Photo by G Fiume/Getty Images)

(CNSNews.com) - Maryland Gov. Larry Hogan said Sunday that the Biden administration is buying all the rapid tests that his state already contracted for.

“Well, we've been pushing for quite some time, you know, the president announced nearly a month ago before Christmas that he was going to distribute these half a billion rapid tests out across the country, and so far we haven't seen any,” he told CBS’s “Face the Nation.”

“We were acquiring our own. You know, the states have been on the front lines throughout this crisis, and now it appears as if, rather than producing more of these rapid tests, the federal government is just purchasing the ones that we had already contracted for,” Hogan said.

“You know, so now we're sort of hijacking the tests that we already had plans for, and we're now getting some of those providers to tell us they no longer have the masks- the rapid tests,” the governor said.

“On masks, you know, I announced last week that we were delivering free of charge 20 million N95 and can KN95 masks across the state, and I think the federal government is following behind trying to do the same thing in other places,” he said.

Host Margaret Brennan pointed out that the Centers for Disease Control and Prevention (CDC) “adapted their guidance on Friday regarding masks, but other states were out there, like Connecticut distributing N95s earlier.”

When asked why he waited until this point to distribute N95 masks, Hogan said, “Well, we've been distributing them throughout the crisis. I mean, from the beginning, but the 20 million is a pretty huge number. So we've had unlimited masks for the schools, for, you know, more than a year already.”

“We've got them out of health departments and hospitals, but now  we're having even bigger reach because we realize that these masks are much more protective and that we've got a much more contagious variant that's spreading not only across our state but across the country,” he said.

When asked whether the governor plans to ask the CDC to authorize a fourth booster for the vulnerable in his state, Hogan said, "Five or six months ago, we did move forward on the third booster ahead of the federal government because we had done our own antibody study in our nursing homes, which were some of our most vulnerable patients that we were very concerned about.

“The CDC was taking their time, and so we were now doing another very similar antibody study in our nursing homes to see if we should move forward with a fourth dose, at least for our most vulnerable patients that are at risk,” he said.

“What's happening in schools right now, and I understand that this is district by district and the decisions are different, but Prince George's County, as you know a District of Columbia suburb, went virtual right around Christmas. They're going back to school in person this coming week. You will oppose that. You wanted kids in person,” Brennan said.

“I don't oppose them going back to school,” Hogan said.

“No, but you oppose them going virtual, and in other parts of the state where they did go back in person, you had some lower attendance rates, because people were sick. So why not allow for a little bit of flexibility there? Is there a time when virtual remote school actually is the best choice?” Brennan asked.

“Well, there is flexibility with local school systems, but what we ought to do and what the state policy actually is, if there's an outbreak in a particular classroom or a particular school, then they have certain protocols that they, you know, they should take, but shutting down entire school systems to punish a million kids,” Hogan said.

“Our school systems have not been overrun, and you know, we started vaccinating teachers more than a year ago as a priority. That was what they asked for. We provided the masks. We provided hundreds of millions of dollars for filtration systems to try to keep our kids safe, and you know, I understand people being concerned about kids,” he said.

“We all are, but we missed a year of learning in some cases, and it's absolutely not the way to go to keep the entire school system shut down,” Hogan said.