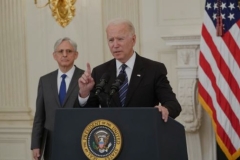 (CNSNews.com) – Attorney General Merrick Garland said Thursday that he "personally approved" the search warrant of former President Donald Trump’s personal residence at Mar-a-Lago in Florida and that he filed a motion to make the warrant and property receipt public.

The attorney general did not address why the raid was conducted in the manner it was instead of issuing a subpoena. He also did not say what the FBI was looking for in the raid. Garland did not take questions, but he said that “more information will be made available in the appropriate way and at the appropriate time.”

Garland also spoke out in defense of what he called “unfounded attacks on the professionalism of the FBI and justice department agents and prosecutors.” He said that they are “dedicated, patriotic public servants.”

Since I became attorney general, I have made clear the department of justice will speak through its court filings and its work. Just now the Justice Department has filed a motion in the Southern District of Florida to unseal a search warrant and property receipt relating to a court approved search that the FBI conducted earlier this week.

Copies of both the warrant and the FBI property receipt were provided on the day of the search for the former president's counsel who was on site during the search. The search warrant was authorized by a federal court upon the required finding of probable cause.

The property receipt is a document that federal law requires law enforcement agents to leave with the property owner. The department filed the motion to make public the warrant and receipt in light of the former president's public confirmation of the search, the surrounding circumstances and the substantial public interest in this matter.

Faithful adherence to the rule of law is the bedrock principal of the Justice Department and of our democracy. Upholding the rule of law means applying the law evenly without fear or favor. Under my watch, that is precisely what the Justice Department is doing. All Americans are entitled to the even-handed application of the law, to due process of the law and to the presumption of innocence.

Much of our work is by necessity conducted out of the public eye. We do that to protect the constitutional rights of all Americans and to protect the integrity of our investigations.

Federal law, longstanding department rules and our ethical obligations prevent me from providing further details as to the basis of the search at this time. There are, however, certain points I want you to know. First, I personally approved the decision to seek a search warrant in this matter.

Second, the department does not take such a decision lightly. Where possible, it is standard practice to seek less intrusive means as an alternative to a search and to narrowly scope any search that is undertaken.

Every day they protect the American people from violent crime, terrorism and other threats to their safety while safeguarding our civil rights. They do so at great personal sacrifice and risk to themselves. I am honored to work alongside them. This is all I can say right now. More information will be made available in the appropriate way and at the appropriate time.