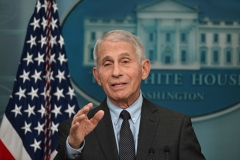 National Institute of Allergy and Infectious Diseases Director Anthony Fauci speaks during the daily press briefing in the James S Brady Press Briefing Room of the White House in Washington, DC, on November 22, 2022. (Photo by JIM WATSON/AFP via Getty Images)

Fauci testified last week before Congress about the role he had in censoring COVID misinformation on social media.

“For a guy that proclaimed to be he was the science and this all-knowing being, it turns out his middle name was ‘I don't recall,’ so we got a lot of that. We got a lot of that in the 7 hours, but we were able to extract some really important information,” Schmitt said.

“First, the lab leak -- he was very well aware that this is a credible theory, much more credible than what he landed on, but they immediately went - I think because they knew they were exposed, because his agency was funding gain-of-function research in Wuhan - went to discredit that and label anybody who came out with that weeks later as a conspiracy theorist,” he said.

“Secondly, as far as a response, Fauci sends along with the World Health Organization delegation his chief lieutenant Dr. Lane to go there, and they witnessed these really extreme measures, these lockdowns that China was imposing and they praised it, and Fauci was completely onboard with that,” Schmitt said.

“Who knows we might have ended up with even more extreme measures, but he was certainly onboard with that and confirmed that that in his depositions, and thirdly, as it relates to masks, a friend actually emails him in February of 2020 asking him if she should wear a mask on a plane and he says basically masks are ineffective,” he added.

“Later on, on March 31, there’s some emails with more studies to confirm that. Then on April 3, he does an about-face and says masks are completely necessary. Mandates follow. Lives are ruined, and COVID tyranny is born. What's clear from this depo, Laura, is when Fauci speaks, Big Tech censors, and that's what this lawsuit is all about,” Schmitt said.

The attorney general said that despite what Fauci says, the Wuhan lab leak theory “is completely plausible.”

In fact, it's way more likely than the animal reservoir theory that they landed on, and what's interesting is, he saw different drafts of a report in a medical journal that was being sent to him in real time, that got more and more critical of the lab leak theory.

He's in a press conference then in March and all of a sudden proclaims that this couldn't have been from a lab leak and surprises everybody because that's where most scientists sort of at the time thought was happening considering the research that was being done in Wuhan by the way in a lab that didn't have the proper security protocols that was being funded by his agency.

So that's why it's so dismissive, but I’ll give you one other tidbit, Laura, that I think is so revealing here. In this deposition, the seven-hour deposition after lunch, the court reporter sneezed and said she had, you know, allergies, when he asked her questions. He wanted her to wear a mask, okay? So, here's the thing -- this is November -- this is November, 2022 --

This is the mentality of the guy who was in charge essentially of now destroying our economy, destroying livelihoods and lives, forcing the masking of our school kids. This is his mentality. So, I think this was always about -- Laura, you talked about it, I talked about it.

This was always about power and control. It's never about the science. He's willing to sort of make it up as he goes along and people have candles dedicated to him, but I think everything is being exposed now, which is why this lawsuit is so important.