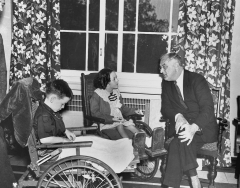 President Roosevelt talks to Renee Daly from Spring Valley, New York and Jerry Gould from Scranton, Pennsylvania. Roosevelt was the guest of honor at a luncheon given at the Warm Springs Foundation.

(CNSNews.com) – MSNBC host Lawrence O’Donnell on Monday compared the Trump administration’s approach to the coronavirus to President Franklin Delano Roosevelt saying during his re-election campaign that we’re not going to win WWII.

As CNSNews.com reported, Democratic presidential nominee Joe Biden twisted Meadows’ words, claiming that Meadows “went on television to admit to the country his administration wasn't even trying -- trying anymore to deal with the pandemic."

“We're not going to control the pandemic. This is the equivalent in that war time presidency model that Donald Trump wanted to have for himself at the beginning of this pandemic before he decided to just quit. It's the equivalent of 1944 and Franklin Roosevelt running for re-election, saying we're not going to win World War II. It just—It’s a statement that in any other universe would completely end the Trump campaign, but it is simply I guess another brick of stupidity on the wall of stupidity that the trump campaign has built,” O’Donnell said.

Former Vice President Joe Biden’s former Chief of Staff Ron Klain, who was the coordinator of the Ebola response team during the Obama administration, said Americans are dying from COVID-19 at the same rate that Americans died in World War II.

As you said, when Vice President Biden claimed that Donald Trump was waving the white flag on COVID this summer, people thought, saw it as an allegation, and now it is official White House policy. They have simply given up and basically are just waiting for the vaccine. Well, that’s not a strategy.

Look, if we simply went to universal masking while we were waiting for the vaccine in the next few months we could save over a hundred thousand lives. That’s the entire death toll from Vietnam almost doubled just by having the president step up and tell people to wear masks, let alone all of the other things the president should be doing, let alone all the other things Joe Biden has called on the country to do in terms of testing and tracing and more social distancing, aid to spread people out in businesses and schools, all these things that could save tens, hundreds of thousands of lives, and Donald Trump and his administration have walked off the battle field.

Klain said that COVID is “the most important issue” in the presidential campaign, “and the division just couldn't be clearer.” He accused President Donald Trump of “practicing COVID denial.”

“Vice President Biden has advocated a comprehensive plan to fight this virus since March. Even in fact, this week it's the one-year anniversary of a tweet he made long before the coronavirus came to our shores warning that America wasn't ready for a pandemic. He's been ahead of the curve and right about this at every step of the way. He called for a universal, nationwide masking mandate in August,” Klain said.

“I'm pleased that this weekend Dr. Fauci endorsed it. Dr. Scott Gottleib, of the-- former of the Trump administration, endorsed what Joe Biden called for back in August. So we have someone who has been ahead of the curve versus someone who at this late date is practicing COVID denial. That is really the Trump administration's position. They just simply deny this is a problem. We shouldn't pay any attention to it. That is costing American lives and should cost Donald Trump the presidency,” he said.

“You have been the one who has been telling us, looking into the future, I think more than most other experts on this subject, and I think it's fair to say looking into the future with the most negative assessment of what the future has been holding for us. What do you see now from where we sit tonight over into say the first six months of next year?” O’Donnell asked Michael Osterholm, director of the Center for Infectious Disease Research and Policy at University of Minnesota.

Osterholm said that by the time the pandemic is over, there won’t be blue or red states, they will be “COVID colored.”

“You know as a scientist I could give you all kinds of scientific descriptions, but let me just say it straight forward. It scares the hell out of me. Right now we are going to see hundreds of thousands of cases every day coming through the pipeline. We're going to see our hospitals filling up. We're going to see intensive care units overrun,” he said.

“And with all the combination of all this now in pandemic fatigue and pandemic anger, the unwillingness to even believe this is a real pandemic combined with indoor air, where we'll really transmit the virus, this is just not a good situation,” Osterholm said.

“And as I said on your show more than six months ago, Lawrence, by the time this is done, there won't be blue states and red states. There won't be blue counties and red counties. They'll be COVID-colored, and that's what's happening right now, and that’s why we're going to continue to see this major increase in cases if we don't do anything to turn this around,” he added.