National Border Patrol Council President Predicts 230,000 Migrants Will Be Released into U.S. Next Month When Title 42 Goes Away 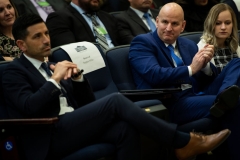 Brandon Judd (2nd R), president of the National Border Patrol Council, claps with others as US President Donald Trump speaks to members of the National border Patrol Council (NBPC) during an event in the South Court Auditorium of the Eisenhower Executive Office Building at the White House on February 14, 2020 in Washington, DC. (Photo by BRENDAN SMIALOWSKI/AFP via Getty Images)

(CNSNews.com) – National Border Patrol Council President Brandon Judd said Tuesday that once Title 42 goes away, the Border Patrol will be releasing about 230,000 people into the U.S. next month.

“I'm really worried about what's going to happen. When you look at the total numbers, right now to this point in the year on a typical year we should be arresting somewhere between 1,000-1,500 people a day. That's a typical year,” Judd told Fox Business’ “Mornings with Maria Bartiromo.”

“Right now we're up to 7,000 people, and it just continues to go higher, and once Title 42 goes away, then the floodgates are going to completely bust, and we're just not going to have anybody in the field, and that's the problem,” he said.

“When you look at the total number of people that are crossing the border, how it distracts and takes resources out of the field and allows the cartels to generate so much profit. We just cannot continue to operate effectively under the current policies that we have,” Judd said.

“So last month, in April, we released 118,000. Next month when Title 42 goes away, we're going to end up releasing about 230,000 people in the United States, and if you look at that, those are astronomical numbers. We have already released into the United States under this administration over a million people. That's larger than some states in the United States. That's just crazy, and it's bad border security policy, which is why so many people are crossing the border illegally,” he said.

Judd said that it’s possible that the number could go as high as 18,000 migrants apprehended each day.

“When you look at the total number of people that we're expecting that want to come here. When you look at Title 42, right now we're expelling the vast majority of people from the Northern Triangle countries - Guatemala, El Salvador and Honduras,” he said.

“Once Title 42 goes away, we're not going to be expelling those people anymore, and those people are going to start coming in mass numbers like we've seen in the past, and that's how we arrive at that number,” Judd said.

“Right now, again, as the numbers continue to tick up, once we stopped expelling about 50% of people, that's when the numbers jumped up to 7,000. If we stop expelling that 50%, then those numbers are going to go up exponentially, as high as potentially 18,000,” he said.

Host Maria Bartiromo reported that a tunnel stretching 1700 miles from Tijuana to San Diego, which was used by cartels to smuggle illegal drugs like fentanyl into the United States, was recently discovered. She said that there’s a fentanyl awareness group calling on the President Biden to track fentanyl overdose deaths the way he tracks COVID-related deaths.
Judd accused the Biden administration of being tone deaf on the issue of fentanyl deaths.

“This is the tone deafness of this administration. When you look at this tunnel, if our resources weren't being distracted from illegal border crossers, the cartels crossing these people, pulling our resources out of the field, then we could use the intelligence, the investigations to go after these tunnels,” he said.

“These tunnels are extremely dangerous, because that's how they get a lot of these drugs into the United States. If this tunnel was even open for four months, that's a huge number of drugs, but this tunnel was estimated to be open for years,” Judd said.

“That means we just did not find it in time to save American lives, and if we're continuing to be distracted by illegal border crossers, then more of these tunnels are going to continue to operate, and more of our U.S. citizens are going to die. That's the tone deafness of this administration,” he said.

Judd said that people lace street drugs with fentanyl to get people addicted, thus giving them a greater chance at overdosing.

“They're trying to get their products into the street. They're trying to market it as mainstream products, but they put the fentanyl in it, which ultimately ends up killing people, but they put the fentanyl in, in order to get people addicted, hooked on to this substance, and once they're hooked, then they have a greater chance of ultimately overdosing, and again, that's the dangerous part of border security,” he said.

“Border security looks at everything. It doesn't just look at illegal border crossers, at people hard trying to come here to get a better job. It looks at all of the criminality that exists, but it we're constantly dealing with high numbers of illegal border crossers, we can't go after the criminality, and that's what we have to do to be able to save American lives,” Judd added.