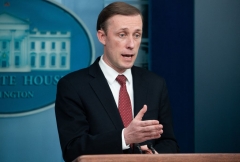 (CNSNews.com) - Russia is poised to invade Ukraine at any time, including during the Winter Olympics, and has mobilized forces along the border with Ukraine, National Security Adviser Jake Sullivan announced on Friday.

“We continue to see signs of Russian escalation, including new forces arriving at the Ukrainian border. As we’ve said before, we are in the window when an invasion can begin at any time should Vladimir Putin decide to order it,” he said.

While he couldn’t comment on the intelligence information that the U.S. has, Sullivan made it clear that an invasion “could begin during the Olympics despite a lot of speculation that it would only happen after the Olympics.”

“As we’ve said before, we are ready either way. We are ready to continue results-oriented diplomacy that addresses the security concerns of the United States, Russia, and Europe consistent with our values and with the principle of reciprocity. We’ve continued to make that clear to Russia in close coordination with our European allies and partners,” Sullivan said.

“We are also ready to respond decisively alongside those allies should Russia choose to take military action. Our response would include severe economic sanctions with similar packages imposed by the European Union, the United Kingdom, Canada, and other countries. It would also include changes to NATO and American force posture along the eastern flank of NATO, and it would include continued support to Ukraine,” he said,

The national security adviser warned Russia that if it moves on Ukraine, “its long-term power and influence will be diminished, not enhanced, by an invasion.”

“It will face a more determined transatlantic community. It will have to make more concessions to China. It will face massive pressure on its economy and export controls that will erode its defense industrial base, and it will face a wave of condemnation from around the world,” Sullivan said.

“If on the other hand, Russia truly seeks a diplomatic outcome, it should not only say so, it should pursue that diplomatic outcome. We are prepared to do that. We have put concrete proposals on the table. They are now out there for the world to see. We’re prepared to engage on them and to discuss the principle and parameters of European security with our European partners and with Russia,” he said.

Sullivan encouraged all U.S. citizens in Ukraine to leave immediately “in the next 24 to 48 hours.”

“If you stay, you are assuming risk with no guarantee that there will be any other opportunity to leave and no prospect of a U.S. military evacuation in the event of a Russian invasion. If a Russian attack on Ukraine proceeds, it is likely to begin with aerial bombing and missile attacks that could obviously kill civilians without regard to their nationality,” he said.

“A subsequent ground invasion would involve the onslaught of a massive force. With virtually no notice, communications to arrange a departure could be severed and commercial transit halted. No one would be able to count on air or rail or road departures once military action got underway,” the national security adviser added.