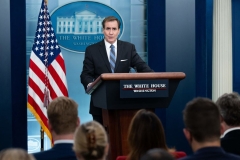 “Why is it that, over the last couple of months, President Biden has been so much tougher on Russia than he is on China?” Doocy asked.

KIRBY: I wouldn’t agree with the premise of the question, Peter.

KIRBY:  Oh, beg to differ.  We’ve been standing up here for almost a week, Peter, talking about our concerns about what China was preparing to do. We put out declassified information that we saw what the Chinese playbook was going to be.

Look, I stood at another podium not long ago, and much of the same way we reacted then we’re reacting now, in terms of being honest and transparent about what’s going on and calling it out for what it is, and then, today, we’re talking about exactly what we’re going to do to make sure we can help preserve a free and open Indo-Pacific. So I’m — I’m afraid I just challenge the premise of your question.

DOOCY: I know you said that there is not a call scheduled with Xi.  Is there a reason why? Because President Biden has known him for decades.

DOOCY: He’s got a lot of free time up there in the Residence this week.

DOOCY: Is there a reason he can’t just pick up the phone and call?

MR. KIRBY:  He’s been working all the way through his illness, quite frankly, Peter. So that’s a little bit insulting, and as for a call —

DOOCY: It’s not insulting to —

DOOCY: — say that the — that someone who is isolating by themselves —

KIRBY:  You suggested he has a lot of free time, as if he’s not doing anything, and you know that’s not the case, Mr. Doocy. Now, look, as for a call with President Xi, I don’t have anything on the president’s schedule to speak to.

If ever the president felt like a call with President Xi was the appropriate way to respond or that it would — that it would have an effect and an outcome that he wants to achieve, he certainly would be willing to do that.  He’s talked to Xi now five times.

It’s not like he’s afraid to pick up the phone and call President Xi, and if there’s a — if a call is the right answer, I’m sure that President Biden will do that, but I’m not going to get ahead of the president on this.

That’s really important, and that’s one of the reasons why President Biden made that call a week or so ago, was to make sure — and you saw it in Karine’s readout — to make sure that those lines of communication stay open, and they are.