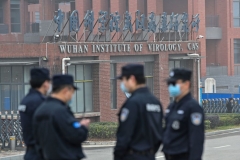 Security personnel stand guard outside the Wuhan Institute of Virology in Wuhan as members of the World Health Organization (WHO) team investigating the origins of the COVID-19 coronavirus make a visit to the institute in Wuhan in China's central Hubei province on February 3, 2021. (Photo by HECTOR RETAMAL/AFP via Getty Images)

(CNSNews.com) - NIH Director Francis Collins confirmed Tuesday that that the National Institutes of Health approved $3.7 million in taxpayer funds to the non-profit group EcoHealth Alliance, which in turn sent $600,000 to the Wuhan Institute of Virology, which is suspected to be the source of the coronavirus.

“One of the things that we have to do is to provide some oversight of the monies that have been appropriated to NIH, and for instance, this morning’s front page story in the Wall Street Journal is the Wuhan lab leak debate,” Rep. Andy Harris (R-Md.) said at a House Appropriations Subcommittee hearing on NIH’s 2022 budget request.

“So this continues to be discussed, and I just would like Dr. Collins maybe just a couple of clarifications. I understand we did not directly fund the Wuhan Institute of Virology, but my understanding is we did send about $3.7 million in grants to EcoHealth Alliance, of which $600,000 went to the Wuhan Institute of Virology to various studies there. Is that true?” Harris asked Collins.

HARRIS: No, I only five minutes. I just need—that’s true, okay, so as I read it. That’s true. Do we know whether the Wuhan Institute of Virology does gain-of-function research?

COLLINS: They were not approved by NIH for doing gain-of-function research. We do not – and that’s the official government identification for that term by the way. We are of course not aware of other sources of funds or other activities they might have undertaken outside of what our approved grant allowed.

HARRIS: So we could have sent money-- through EcoHealth Alliance, money could have ended up in the Wuhan Institute of Virology, which might be doing gain-of-function research, and in fact, since they sent a general of the Communist Party army to take over the lab in February 2020. It’s not out of the realm of possibility they’re doing that. Because I do know that money is somewhat fungible, once you send money to institutes, that it bothers me a little bit that we would send money to an institute that might be doing gain-of-function research, especially China. Do we send any money to any sub-agencies or sub-grantees that could be sending money to Russia?

COLLINS: I don’t know the specific answer to that. I think we have in the past, and I don’t know whether we currently do or not.

HARRIS: And we will submit it as a QFR, if you could get back to us about that.