North Carolina Gov. Roy Cooper: ‘Your Zip Code Should Not Determine Your Rights’ 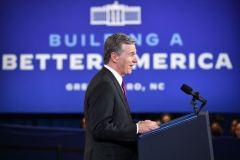 (CNSNews.com) - North Carolina Gov. Roy Cooper said Friday that he has although his state won’t amend its constitution to ensure abortion access in his state, as a Democrat, he will “protect reproductive freedom” in the state.

Speaking virtually at President Joe Biden’s meeting with governors on “reproductive rights,” Cooper said that he’s heard from one Planned Parenthood provider that almost 200 patients from out of state have scheduled appointments for abortion services.

And unlike Governor Hochul in New York, our Republican legislature is not going to amend the Constitution, but this Democratic governor is going to hold the line to protect women’s reproductive freedom in our state.

It has really been devastating for so many, as reproductive care really has been halted in its tracks in many places across the country. That constitutional right that women have relied on for five decades has been ripped away, and for now, at least, where you live will determine your rights.

So, for now, it’s up to the states to determine whether can — women can get reproductive healthcare, and in North Carolina, they still can, and I’m determined to keep it that way. Because of our location in the southeast, Mr. President, North Carolina is already seeing an influx of patients coming to our state for safe care.

According to Planned Parenthood of the South Atlantic, their clinics in North Carolina have scheduled 192 patients from out of state for the next week alone.

That means about 10,000 extra patients from out of state coming to North Carolina in the next year, mostly from states that have bans and tighter restrictions, and those, Mr. President, are just the numbers from Planned Parenthood. That doesn’t include our state’s other trusted providers, so we know those numbers will be a lot higher.

Your ZIP code should not determine your rights.  North Carolina has a law that’s going to prevent obstructing access to these clinics, and we’re working with law enforcement to make sure that that law is enforced.

Women and doctors should not have these politicians in the exam room with them looking over their shoulders, and I’m going to continue to trust women to make their own medical decisions.

To accomplish this, Cooper said, there needs to be enough Democratic state legislators in his state to sustain his vetoes “as they have a time and again before.” He said it also means keeping and electing more Democratic governors nationwide this November. The governor said that’s his mission as chair of the Democratic Governors Association this year.

“Because, Mr. President, governors — right now, governors really are the last line of defense, and they’re also the first chance at progress, which you’re going to hear today, especially with this Supreme Court on such a destructive path,” Cooper said, and he urged Biden to do everything he can at the federal level to ensure women can get abortions.