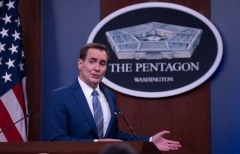 Pentagon Spokesman John Kirby speaks during a press briefing on the situation in Afghanistan at the Pentagon in Washington, DC on August 16, 2021. (Photo by ANDREW CABALLERO-REYNOLDS/AFP via Getty Images)

(CNSNews.com) – Pentagon Press Secretary John Kirby said Thursday that those in the military who decline the COVID vaccination “will be given an opportunity to talk to both medical providers as well as their own chain of command so that they can fully understand the decision that they are making,” but he stopped short of saying that they won’t be given a dishonorable discharge.

“I had a COVID question. The House is considering some legislation right now that would prohibit dishonorable discharge for any troop who declines a COVID vaccine. I'm not going to ask you to comment on the legislation, but I want to ask you about the punishment. Is dishonorable discharge going to be the outcome for troops who have refused the vaccine?” Travis Tritten from Military.com asked.

“Travis, as we've talked about before, the secretary expects that the department leadership will implement these mandatory vaccines with skill, but also -- because we know who to do this across a range of other vaccines -- but also professionalism and compassion, and when an individual declines to take a mandatory vaccine, they will be given an opportunity to talk to both medical providers as well as their own chain of command so that they can fully understand the decision that they are making,” Kirby said.

“And the other thing I'd say is that our commanders have a range of tools available to them short of using the Uniform Code of Military Justice to again try to get men and women in the department to make the right decision here,” he said.

“So if those other tools do fail, though, and it does go to UCMJ, can you speak at all what the outcome is? Are there a range of potential outcomes or are we looking at dishonorable discharge?” Tritten asked.

“There are -- I mean, if it goes to a disciplinary procedure, there are, again, a range of options available to commanders short of charges being filed and punishment of any given kind, and this would be something that commanders would handle themselves, Travis,” Kirby said.

“It's not something -- it wouldn't be some top-down driven set policy for every case across the whole department,” the press secretary said.

“This would be something that commanders would be able to decide for themselves, but I want to stress -- and I don't think it's helpful to get into hypotheticals right now when we're still just at the beginning of this, but I also want to stress that the secretary's expectation is that commanders will lead with compassion here and will try to make available to members who are not willing to abide by the mandatory vaccine, to make sure that they understand the ramifications of their decision and that they have as much additional exposure to information and context as possible as they -- as they move forward,” he said.

Meanwhile, the House Armed Services Committee passed an amendment to the FY2022 National Defense Authorization Act (NDAA), sponsored by Rep. Mark Green (R-Tenn.), which would ban dishonorable discharge for anyone who refuses to get vaccinated against COVID-19.

“As a physician, I’ve weighed the pros and cons of the COVID-19 vaccine and have chosen to get the shot. As a former Army officer, I also understand the need to vaccinate servicemembers on deployment against a highly infectious virus. For years, the military has possessed the authority to compel servicemembers to be vaccinated,” Green said in a statement.

“However, those vaccines underwent years of research with ample longitudinal safety data. In the case of the coronavirus vaccine, that longitudinal data is not yet possible. Therefore, I believe servicemembers who make the personal medical decision to refuse the vaccine, and are subsequently separated from the service for their refusal, should not receive anything other than an honorable discharge for refusing to take the vaccine. Period,” he said.

“I’m grateful to Chairman Smith and Ranking Member Rogers for working with me to get this commonsense amendment to a place of broad bipartisan support. No American who raises their hand to serve our Nation should be punished for making a highly personal medical decision.” Green added.