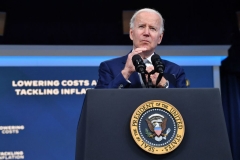 President Joe Biden speaks about his plan to fight inflation and lower costs for working families, in the South Court Auditorium of the White House in Washington, DC, on May 10, 2022. (Photo by NICHOLAS KAMM/AFP via Getty Images)

Shortly after the president’s speech on inflation, a reporter asked Psaki, “I was hoping to clarify something President Biden said today on inflation. He said his policies helped, rather than hurt, on inflation. Does the president believe that his COVID relief package played any role in the increase in inflation last year?”

“The president believes, as many economists, including within the government, that the main drivers of inflation were the pandemic — have been the pandemic and our ongoing fight to address that, as well as President Putin’s invasion into Ukraine and the impact on energy prices,” Psaki said.

“What the president has done is taken steps to address both of those enormous, enormous challenges and tried to put forward solutions to them. We’ll leave it to the Federal Reserve, outside economists, inside economists to make other projections on what’s next. They’ve already made projections about when they expect inflation to come down,” she said.

“As he noted today, he is the president. We do- — do control all forms of — branches of government. That’s why he laid out very clearly what he’ll continue to do as president to bring down prices,” the press secretary added.

“So then, just to make sure, like, what he’s saying is: The pandemic is distinct from the spending in response to the pandemic, and he does not believe the size of the spending mattered with regard to inflation?” the reporter asked.

“Again — no. He — and we have — we have spoken to this in the past, Josh, as you know.  The president made a decision that in order to address what was in part a economic crisis that came in, in conjunction with the pandemic, that we needed to put forward the American Rescue Plan, and without it, the economy would have gotten worse. People would not have been able to put food on the table,” Psaki said.

“We would not have 100 percent of schools open today. So, no, he does not think that is the driver.  He knows the pandemic was the driver. There was, of course, an accompanying economic downturn as a result, and we’ve seen in recent months the impact of President Putin’s invasion and the energy prices that have gone up and been a main driver of inflation,” she said.