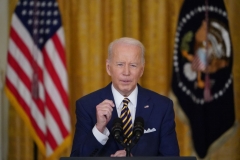 President Joe Biden speaks during a press conference on the eve of his first year in office, from the East Room of the White House in Washington, DC on January 19, 2022. (Photo by MANDEL NGAN/AFP via Getty Images)

(CNSNews.com) - White House Press Secretary Jen Psaki said Thursday that President Biden was not trying to cast down on the legitimacy of the midterm elections.

“President Biden said that midterm elections ‘easily could be illegitimate.’ Is he predetermining that the November elections are going to be suspect?” a reporter asked.

“I talked to the president about this last night and this morning. He was not intending to cast doubt on the legitimacy of the 2020 election,” the press secretary said.

“He was actually attempting to make the opposite point, which is that in 2020, despite COVID, despite many attempts to suppress the vote, a record number of voters - Democrats and Republicans, independents too - turned out in the face of a pandemic, and election officials made sure they could vote and have those votes counted,” Psaki said.

“He was also explaining that the results would be illegitimate if states do what the former president asked them to do in more than a half a dozen states in 2020 after the 2020 election - toss out ballots and overturn results after the fact, and his view is that one of the most important roles we can play now is informing and educating the public on what these laws are, on efforts to suppress their vote, and even beyond the laws, efforts in different states across the country to make it more difficult for them,” she said.

Later Psaki was asked to again to clarify the president’s remarks.

“Let me ask you, if I can follow up on the questions about — about voting rights and the integrity of the election.  You say the President’s intention was not to cast doubt on the upcoming midterms, but when a reporter followed up, the president said to him, ‘I’m not [saying] it’s going to be legit. The increase and the prospect of being illegitimate is in direct proportion to us not being able to get these reforms passed.’ So, yes or no: Does the president believe, if all remains as it is right now, that the elections this fall will be legitimate?” a reporter asked.

“He is — well, yes, but what he is — what the point he was making is that as recently as 2020, as we know, the former president was trying to work with local officials to overturn the vote count and not have ballots counted, and we have to be very eyes wide open about that and clear-eyed that that is the intention — potentially of him and certainly of members of his party,” Psaki said.

“So to be clear: The president is satisfied even if — because it — yesterday, obviously, voting rights hit a wall in Congress right now without the votes for the filibuster rules to be changed, and given the conversation we just had about other avenues that can be taken. If there is — if there are no changes in terms of voting rights legislation going forward, the president does still feel confident that the elections this fall will be legitimate?”

As CNSNews.com reported, when asked Wednesday whether he believes the upcoming election will be fairly conducted and its results will be legitimate if the voting rights legislation is not passed, Biden said, “Well, it all depends on whether or not we’re able to make the case to the American people that some of this is being set up to try to alter the outcome of the election, and it’s one thing — look, maybe I’m just being too much of an optimist.”

Asked to clarify, Biden said, “I think it easily could be — be illegitimate.”

“Oh, 2022. I mean, imagine if those attempts to say that the count was not legit. ‘You have to recount it and we’re not going to count — we’re going to discard the following votes,’” the president said.