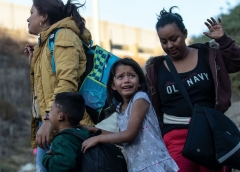 A girl cries as a group of Central American migrants surrender to US Border Patrol agents after jumping over the metal barrier separating Playas de Tijuana in Mexico from the United States, on December 2, 2018, as seen from Playas de Tijuana. (Photo by GUILLERMO ARIAS/AFP via Getty Images)

(CNSNews.com) - White House Press Secretary Jen Psaki announced Tuesday that the number of migrant children in the custody of the Customs and Border Patrol (CBP).  has dropped from more than 5,000 in March to 600 today, and the amount of time that unaccompanied minors spend in CBP facilities has decreased by 75 percent.

Prior to doing her announcement, the press secretary blamed the surge of illegal immigrants at the border on former President Donald Trump.

“I wanted to provide a brief update on the situation at our southern border. After four years of an immigration system rooted in destructive and chaotic policies, President Biden is taking the challenge head on and is building a fair, orderly and humane immigration system. That’s our objective,” Psaki said.

“After coming into office, our administration immediately jumped into action to address the influx of migrants at the border, something that began during and was exacerbated by the Trump administration. We wanted to provide a couple of pieces of data you may have seen, but they’ve come out since we had a briefing in here,” she said.

“At the end of March, there were more than 5,000 children in Customs and Border Protection patrol stations. Today, that number is approximately 600. The amount of time children spend in CBP facilities is down by 75 percent - from 131 hours at the end of March to under 30 hours now,” Psaki said.

“Just yesterday, the Department of Homeland Security announced it would begin the process of reuniting a number of families who were separated by the policies of the previous administration. Clearly, we’re not done. There is a lot of work ahead. Migration is a dynamic and evolving challenge, but the president has a plan, and we are working on implementing it,” the press secretary said.