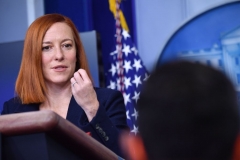 White House Press Secretary Jen Psaki answers a question during a press briefing on January 29, 2021, in the Brady Briefing Room of the White House in Washington, DC. (Photo by NICHOLAS KAMM/AFP via Getty Images)

(CNSNews.com) - White House Press Secretary Jen Psaki on Wednesday could not name one Republican who said they wanted to defund the police.

Instead, she doubled down on her assertion that Republicans defunded the police by voting against the American Rescue Plan, adding that for decades, they tried to cut funding for the COPS program.

White House Press Secretary Jen Psaki on Wednesday doubled down on her assertion that Republicans defunded the police by voting against the American Rescue Plan, adding that for decades, they tried to cut the COPS program.

PSAKI: Well first let me just note that the president ran and won the most votes of anyone in history on a platform of boosting funding for law enforcement after Republicans spent decades trying to cut the COPS program. There’s record of that. That doesn’t require anyone having new comments and then also stood in the way of crucial funding needed to prevent the laying off of police officers as crimes increased. That’s a simple statement of fact.

PSAKI: I think most people would argue that actions are more important than words, wouldn’t you say?

DOOCY: To your point there, at the time of the vote on the American Rescue Plan, you had Republican leader in the Senate Mitch McConnell, he said he just didn’t like it, because it was a classic example of big government Democratic overreach in the name of COVID relief, and then Kevin McCarthy said he thought Democrats were using coronavirus as an excuse to justify funding pet projects. Where is the, we’re going to vote against this, because we want to defund the police?

PSAKI: Again, I think actions speak louder than words, Peter, so if you oppose funding for the COPS program, something that was dramatically cut by the prior administration and many Republicans supported and then you vote against a bill that has funding for COPS program, we can let other people evaluate what that means. It doesn’t require them to speak to it or to shout it out. Their actions speak for themselves.

According to the DOJ’s website, “The Office of Community Oriented Policing Services (COPS Office) is the component of the U.S. Department of Justice responsible for advancing the practice of community policing by the nation's state, local, territorial, and tribal law enforcement agencies through information and grant resources.”