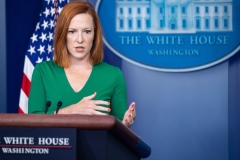 White House Press Secretary Jen Psaki speaks during the daily press briefing on August 6, 2021, in the Brady Briefing Room of the White House in Washington, DC. (Photo by SAUL LOEB/AFP via Getty Images)

(CNSNews.com) - White House Press Secretary Jen Psaki on Friday defended mask mandates for students in schools, despite opposition from people like Florida Gov. Ron DeSantis who expressed concern that forcing kindergarteners to wear masks for hours at a time could be harmful to them emotionally, academically, and psychologically.

Psaki, who has two young children, said that her “rising kindergartner” told her she could wear a mask all day and that she’s just happy to go to camp and to school.

Fox News White House Correspondent Peter Doocy asked Psaki, “Back to school question. Florida’s Governor DeSantis says that he may start withholding funds from school districts that don’t let parents opt out of policies that require masks in the classroom. Does the president think that parents should have that kind of power?”

PSAKI: I think I’ve spoken to this a few times, but I will say as a parent myself of two young children that I want public health officials to make decisions to keep my children safe, not politicians, and not only is Governor DeSantis not abiding by public health decisions, he’s fundraising off of this, so my view is that -- and our view as an administration is that parents in Florida, parents across the country should have the ability and the knowledge that their kids are going to school, and they’re in safe environments. That shouldn’t be too much to ask.

DOOCY: He says that his concern is about harmful, emotional, academic and psychological effects of putting kindergartners in masks for hours at a time. Is there any concern from officials that you guys have during your early pre-decisional discussions about that?

PSAKI: No, there’s not, and I will tell you from personal experience my rising kindergartner told me two days ago she could wear a mask all day, and she’s just happy to go to camp and go to school, and the objective from all of our public health officials has been clearly, and the secretary of education, children need to be in school.

We know there’s a mental health impact of them not being in school, and we should take the mitigation measures needed in order for them to be in school and in the classroom, including masking and including allowing that to be part of a reality in these schools to keep the community safe.