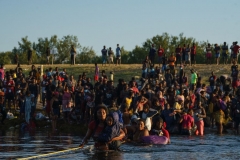 Haitian migrants continue to cross across the US-Mexico border on the Rio Grande as seen from Ciudad Acuna, Coahuila state, Mexico on September 20, 2021. (Photo by PAUL RATJE/AFP via Getty Images)

(CNSNews.com) - When asked to explain why the Biden administration is deporting Haitian migrants who showed up at the border in Del Rio, Texas, while Afghans and Afghan supporters and even some Mexicans are allowed to stay in the U.S., White House Press Secretary Jen Psaki said Monday that the United States’ immigration policy does not “discriminate against one country over another.”

“The crisis at the border in Del Rio, we heard DHS say that they continue expulsions under Title 42, so what is the White House’s message to Haitian immigrants seeking asylum? Is there a place for them?” a reporter asked.

REPORTER: For the people that are here.

PSAKI: I understand, but that does apply to people that are here who arrived before a certain date, and I think that’s an important component of what’s happening. If you’re talking about the situation on the ground in Del Rio, one, it’s a challenging situation. It’s devastating to watch this footage. I think it’s important though for people to know that what we’re trying to do is also protect people.

One, we’ve been conveying that this is not the time to come. We have been implementing Title 42. That’s not just about people in the United States. That’s also about protecting migrants who would come and come in mass groups and be in mass groups. We are also surging resources and taking a multi-pronged approach. We’ve been working with the Red Cross to bring in much needed resources.

We’ve worked with World Central Kitchen to bring in meals, and we have been expediting repatriation flights, both to a range of countries in South and Central America where people may have come from if they are-- can be accepted back and some back to Haiti. That is what our focus is on at this point in time.

And our message continues to be as you’ve heard Secretary Mayorkas convey, now is not the time to come for a range of reasons, including that we don’t have the immigration system up and running in the way that we want, including there is still a pandemic and Title 42 remains in place, and these are the steps that we’re taking in part to protect the border communities as well as the migrants themselves.

April Ryan, White House correspondent for The Grio, asked Psaki why Afghans and Mexicans are allowed to stay in the U.S. while Haitians are being sent back. She said that Rep. Sheila Jackson Lee (D-Texas) is calling for Haitian migrants to be treated equally and fairly.

RYAN: Back on Haiti, I hear that, but digging in the weeds a bit more, the process for Haitian migrants has always in this nation been different than other nations. You have people like Congresswoman Sheila Jackson Lee who’s calling for equal treatment and fairness when it comes to the Haitians at the border and overall.

“You’re allowing Afghans to come in, Afghan supporters to come in as well as Mexicans and then Haitians are not allowed. Can you speak to that - the issue of equity and fairness?” Ryan asked.

PSAKI: Absolutely, April. I appreciate your question. Let me just take these different pieces side by side, right? One, our immigration policy is not about one country or discriminating against one country over another. We want to end that and hopefully put an end to what we saw over the last four years.

Let me start with Afghan allies. Afghans who are arriving in our country are entering in a sanctioned and orderly process that includes vetting and security screenings led by the Departments of State, Defense, and Homeland Security.

It’s not about one particular country of origin, but we’ve outlined very specifically in here what those processes look like as individuals who are evacuated go to lilypad countries, go through security vetting before they come to the United States on a range of programs

As it relates to individuals who are coming across the border wherever they’re coming from, whatever country they’re coming from Title 42 remains in place. There are a range of programs that people who are in the country can apply for or may be eligible for, including TPS for Haiti, which is something that we still are continuing to look at and review.

The secretary of state, the secretary of homeland security are constantly assessing circumstances on the ground that would necessitate a TPS designation for any country, and they’ve obviously made a couple of designations over the course of the last couple of months as it relates to Haiti.

RYAN: And no matter whether it’s the people who left, the Haitians that left in 2010 and traveled to South America and now trying to travel here or the ones who left after this earthquake, either way, what is there for them to go back to when these planes are taking them back?

The nation is in unrest. The president was assassinated. There are gangs the people are scared to-- scared of. Democratic rule is not necessarily in place. People are calling, particularly those here in this nation, are calling for elections not to be held on time because of the unrest there, and then you also have the issue of the earthquakes. So what is there to go back to? What are you deporting them back to?

That is ongoing, and we certainly support and want to be good actors in supporting Haiti during a very difficult time as you noted with a government that is still working to get back to a point of stability with recovery from an earthquake. That’s why we have a range of programs, options, as well as financial support in place.