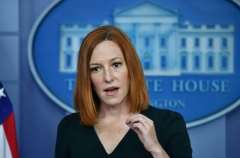 White House Press Secretary Jen Psaki speaks during the daily press briefing at the White House on May 4, 2021 in Washington, DC. (Photo by NICHOLAS KAMM/AFP via Getty Images)

(CNSNews.com) – White House Press Secretary Jen Psaki said Tuesday that the spike in violent crime in the past year is a problem that began during the Trump administration, and President Joe Biden is focused on solutions, which is why he proposed $5 billion to fund community violent intervention programs in in the American Jobs Plan.

“And on the rise in violent crime, compared to this time last year, homicides up 113 percent in Minneapolis, up 38 percent in Philly, up 22 percent in Chicago. Just to clarify the White House’s position on this is that that is mostly because of guns?” Fox News White House Correspondent Peter Doocy asked.

“First, I’m not sure what data you’re looking at, but I think what we can --- most data that is out there shows that there’s actually been a rise in crime over the course of the last year, since the start of the pandemic, which actually pre-dates President Biden taking office to be totally clear,” Psaki said.

“That’s also why we fought for funding for state and local governments in the Rescue Plan, something many opposed. There was a lot of Republican opposition to that. That’s helped keep cops on the beat and other public servants in vital roles, and it’s why his budget proposal-- his budget proposes to increase funding for the COPS program by $300 million to invigorate community policing,” she said.

“The mayor of St. Louis says that she believes more police does not prevent crime. Does President Biden agree with that?” Doocy asked.

“The president believes there’s a number of steps that need to be taken to rebuild trust in communities. Police reform is long outdated. He also believes that there needs to be funding for local programs and local initiatives, and there’s not going to be a shortage of funding under our watch,” Psaki said.