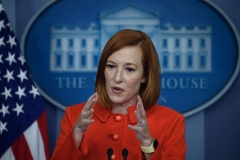 As CNSNews.com reported, Abbott’s executive order states that no entity in Texas can compel anyone - “employee or consumer” - to get the COVID-19 vaccine if they have an objection “for any reason of personal conscience, based on a religious belief, or for medical reasons, including prior recovery from COVID-19.”

The governor’s executive order was in response to President Joe Biden announcing last month that he would require all federal employees to get fully vaccinated against the coronavirus and for employers with more than 100 employees to require either vaccination or weekly COVID tests for their workers.

When asked whether the Biden administration plans to sue Texas over Abbott’s executive order and whether there is a risk that Occupational Safety and Health Administration OSHA’s efforts get tied up in litigation rather than having an immediate effect, Psaki said, “Well these requirements are promulgated by federal law, so when the president announced his vaccine mandates for businesses, that--- of course we’re waiting on OSHA regulations as far as the next step, that was pursuant to federal law and the implementation of federal law, because it’s an executive order.

So our intention is to implement and continue to work to implement these requirements across the country, including in the states where there are attempts to oppose them. I will say, since you gave me the opportunity, Governor Abbott’s executive order banning mandates, and I would also note an announcement by Governor DeSantis this morning, essentially banning the implementation of mandates fit a familiar pattern that we’ve seen of putting politics ahead of public health.

Over 700,000 American lives have been lost to COVID-19, including more than 56,000 in Florida and over 68,000 in Texas, and every leader should be focused on supporting efforts to save lives and end the pandemic. Why would you be taking steps that prevent the saving of lives, that make it more difficult to save lives across the country or in any state?

And I would also note that vaccine requirements have been standard in both the Lone Star state - Texas, in case you’re not familiar - and the Sunshine State - Florida - in schools for decades - whether polio, measles, mumps, rubella, the chicken pox.

There are vaccine requirements that have been implemented for decades in these states, so these decisions that put these two leaders out of step with both longtime requirements, a history of vaccine mandates but also many business leaders in their states, and many businesses that are based in their states, including Disney and American Airlines.These leaders are taking steps to help boost vaccination rates, reduce deaths, hospitalizations, reduce hospitalizations and expand the country’s labor pool.