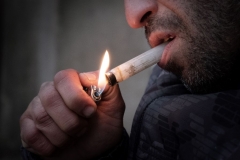 Oussman, a crack addict lights a pipe at Stalingrad Square, nicknamed Stalincrack, on December 2, 2020 in Paris. This "drug of the poor" has been wreaking havoc in the north-east of the capital for thirty years. (Photo by JOEL SAGET/AFP via Getty Images)

(CNSNews.com) - The White House said Wednesday that a $30 million federally funded “harm reduction” program to distribute “safe smoking kits” does not include crack pipes and never did.

As CNSNews.com previously reported, the Washington Free Beacon reported that an HHS spokesman said the safe smoking kits "will provide pipes for users to smoke crack cocaine, crystal methamphetamine, and 'any illicit substance.'"

“HHS and ONDCP are focused on using our resources smartly to reduce harm and save lives. Accordingly, no federal funding will be used directly or through subsequent reimbursement of grantees to put pipes in safe smoking kits. The goal of harm reduction is to save lives,” the statement read.

“The Administration is focused on a comprehensive strategy to stop the spread of drugs and curb addiction, including prioritizing the use of proven harm reduction strategies like providing naloxone, fentanyl test strips, and clean syringes, as well as taking decisive actions to go after violent criminals who are trafficking illicit drugs like fentanyl across our borders and into our communities. We will continue working to address the addiction and overdose epidemic and ensure that our resources are used in the smartest and most efficient manner,” the statement added.

Fox News White House Correspondent Jacqui Heinrich asked White House Press Secretary Jen Psaki whether crack pipes were ever part of the kit or if they were removed as a result of backlash.

“HHS just put out a statement clarifying around some reports that crack pipes are not part of the Safe Smoking kits that are funded by the administration, but can you clarify for us were they never part of the kit or were they removed in response to this pushback?” Heinrich asked.

PSAKI: They were never part of the kit. It was inaccurate reporting, and we wanted to put out information to make that clear.

HEINRICH: What is in the safe smoking kit?

PSAKI: So the Safe Smoking kit may contain alcohol swabs, lip balm, other materials to promote hygiene and reduce the transmission of diseases like HIV and hepatitis. I would note that what we’re really talking about here is steps that we’re taking as a federal government to address the opioid epidemic, which is killing tens of thousands if not more Americans every single day, week, and month of the year.

We put out this statement though because there was inaccurate information out there, or I should say HHS put out the statement, because there was inaccurate information out there, and we wanted to provide clarification on the allowable uses for the HHS Harm Reduction program, not a change in policy. This program though is focused on harm reduction strategies, including prioritizing the use of fentanyl test strips and clean syringes.

All of these harm reduction services that will be supported by these programs are intended to save lives from an epidemic that we know is devastating to communities across the country.

HEINRICH: And then so just to put a final point at it, does the administration support any effort to distribute drug paraphernalia like the types that we were hearing about?

PSAKI: The statement makes clear that we don’t support federal funding direct or indirect for pipes.

PSAKI:  It’s under litigation, so I can’t speak to that, but what I can tell you and reiterate is that the White House is committed — as I will — as I would reiterate for you, many Democrats and Republicans, including Senator Cruz — to taking steps to address the opioid crisis. This is not an issue that is inflicting just blue states. It is inflicting millions of Americans across the country, and it is important that we take steps to address it.

HEINRICH: So, just final wrap of those two items: What would you say to critics who are concerned that the Biden administration is somehow encouraging illegal drug use?

PSAKI: I think that it’s important to step back and remember — just to put a little more of a fine point on it — that we are losing an American life every five minutes to overdose. We don’t have time for political games.

The president is focused on saving lives through harm reduction programs. That’s exactly what we’re talking about here. They work in red states, and they work in blue states. We know they save lives; they help connect people to treatment and recovery, and they were endorsed this week by a bipartisan commission co-chaired by Senator Tom Cotton that examines steps we must take to address the devastating toll of overdoses.