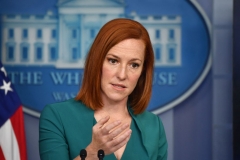 White Hose Press Secretary Jen Psaki holds a press briefing in the Brady Briefing Room of the White House in Washington, DC on May 11, 2021. (Photo by NICHOLAS KAMM/AFP via Getty Images)

She pointed out that when President Joe Biden took office, the pipeline was 95 percent built, and she asked “In what way were we going to be able to stop a project in another country that’s been built to 95 percent?”

As CNSNews.com reported, Nord Stream 2 AG, the company leading the project, is a consortium led by the Russian state-owned Gazprom.

“On Nord Stream, I know that there’s a lot of talk about Nord Stream and Keystone and I’m just trying to help people understand it,” Fox News White House Correspondent Peter Doocy asked.

DOOCY: It seems like there was the ability by US government to sanction some officials, to stop the project at like 95 percent, but you’re not doing it.

PSAKI: In what way were we going to be able to stop a project in another country that’s been built to 95 percent?

DOOCY: Make it more difficult with the sanctions on some of these officials involved?

PSAKI: We’ve imposed sanctions on four Russian entities, four Russian vessels that engaged in sanctionable activities. We’ve also imposed sanctions on nine vessels belonging to the Russian government. This is the largest number of entities listed under this act to date, so we have certainly taken significant steps, and we’ve also made clear in public and private channels our opposition to this plan.