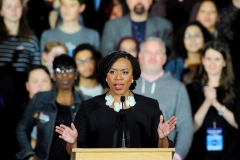 “It’s criminal behavior …. I don’t know what else to call it. They have been complicit from the very beginning and their willful criminality to carry the water for Donald Trump and the science denials, which allowed this pandemic to rage out of control, and then by refusing to wear masks,” she said in a video.

“This is criminal behavior — that’s chemical warfare so far as I’m concerned,” said Pressley, whose husband tested positive for the coronavirus after being locked down inside the Capitol with her during the siege.

“This is exactly why we should be moving, and I was very proud to be an original co-sponsor of Representative Bush’s resolution calling for the expulsion of these members,” she said, referring to a resolution by Rep. Cori Bush (D-Mo.) introduced on Monday to investigate and potentially expel House members “who sought to overturn the 2020 Presidential election.”

“They are unfit to serve. When they took us to the ‘safe room,’ and I walked in and saw, there was this contingent of anti-maskers in the room gathered, I immediately exited. So imagine in that moment the choice that I was making, and we were told as we left that space, you’ll be on your own in an evacuation, and I said, I’ll take my chances,” Pressley said.

“So in the midst of this terrorizing event, which inflicted great trauma, injury and loss of life, where you would think even in that moment that they would attempt to extend some grace, some collegiality or just to be decent human beings, they chose to recklessly endanger the members in that room, my spouse, my staff, and that of everyone else who was in proximity to them,” she added.