Rep. Cammack on AOC Criticizing DeSantis for Being Missing for 2 Weeks: ‘Why Don’t You Explain Those 62 Proxy Votes’ 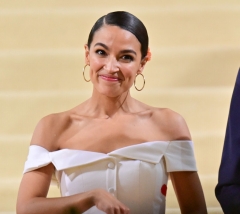 Swalwell accused Republicans of prolonging the pandemic and forcing people to cancel their vacations and forcing students to go back to virtual learning, yet, he was spotted going maskless in Florida.

“As we end 2021, mired in a deadly pandemic, you should know who has prolonged it. THESE GUYS. Republican liars. Your vacation canceled. Your kids back to virtual learning. And back to masks everywhere. For blame look no farther than #TheseGuys,” Swalwell tweeted.

“It really has become a situation where the Democratic Party, the liberal left, they have become the party of do as I say, not as I do,” Cammack told Fox Business’ “Mornings with Maria Bartiromo.”

“And you would think that this would be something that of all people, Eric Swalwell could wrap his head around, because you know this whole leading by example thing seems to be a foreign concept for the vast majority of Democrats today, but as we know, Representative Swalwell seems to like foreign things like Chinese spies, and unfortunately we find another Democrat in the Sunshine State, a state in which he has criticized,” she said.

“He’s criticized the leadership of Governor Ron DeSantis and again we find him telling everyone that their vacations are going to be canceled because of the leadership of Republicans. Yet here he is vacationing in a Republican-led state. The hypocrisy of the left simply knows no bounds,” the congresswoman said.

Similarly, AOC criticized Florida Gov. Ron DeSantis for being “missing” for two weeks, despite the fact that he was accompanying his wife to her cancer treatments.

“I have to give credit to Governor DeSantis and his team, but most especially his wife, Casey. AOC, she is in South Miami, in South Florida vacationing for I think about a week now at this point, and she criticizes him, saying he's been inexplicably missing for two weeks,” Cammack said.

“Well, he has actually been with his wife Casey, who is battling breast cancer, so he's been accompanying her to her treatments. Yet, AOC doesn't seem to acknowledge that and so I like to say, you know, why don't you explain your 62 proxy votes this year, the votes that she just simply couldn't make it into Washington for. Don't you think that her constituents deserve to know?” she said.

“Furthermore, one in eight women in her district are battling breast cancer, does she not think their spouses or their person should be with them? Apparently not. So again, the hypocrisy of the left, they simply have no moral high ground when they do one thing and say another, and the American people see right through it and that's all the more reason why we're going to win the election in November overwhelmingly,” the congresswoman added.