Rep. Cicilline: ‘I Don’t Think There Is a Single Incident’ of Someone Using an Assault Weapon Being Stopped by Someone with a Gun; Rep. Massie Names 11 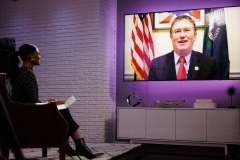 Rep. Thomas Massie (R-KY) appears as a guest via teleconference with Candace Owens during a taping of "Candace" hosted by Candace Owens on January 11, 2022 in Nashville, Tennessee. (Photo by Brett Carlsen/Getty Images)

(CNSNews.com) - Rep. David Cicilline (D-R.I.) said Thursday that he doesn’t think there’s “a single incident” where someone with an assault weapon “was stopped by a person with a gun,” but Rep Thomas Massie (R-Ky.) was quick to dispute that assertion, naming 11 instances where “a good guy with a gun” stopped “a bad guy with a gun.”

“I don’t think there is a single incident – and maybe there’s one, but I’ve not found one – of an assailant using an assault weapon that was stopped by a person with a gun, so this is a--- maybe there’s one of the thousands and thousands and thousands of shootings, but the truth of the matter is school resource officers are an important response to school safety,” Cicilline said at a House Judiciary Committee hearing mark-up on the Democrat-backed gun control bill Protecting Our Kids Act (H.R. 7910).

"The Democrats – I don’t know if they’re just in willful ignorance of what happens in this country or they’re being deceptive today, but I would like to introduce into the record a list of cases where concealed handgun permit holders have likely stopped mass public shootings. This is from crimeresearch.org, and it’s published May 27th, 2022," Massie said.

I’ll read from this list, and I’m gonna run out of time, but I’ll try to make each of these summaries brief, because there are dozens of instances. Even though the media doesn’t want to report them, sometimes they get reported.

Just this week, last week May 25, 2022, Charleston, West Virginia. Here a man with an extensive criminal history started firing an AR-15 style firearm into a crowd. Fortunately, a woman who was legally carrying a gun was able to stop the attack. She shot the attacker. It ended before anybody got hurt.

South Fulton, Ga., May 3rd, 2022. A teenager started firing his gun at multiple people. There was a large number of people present at the park because of an anti-violence riot. South Fulton, Ga.

This comes from a news report. Meadows said the man involved in the shootout with Hambrick had been cooperative and will not be charged, since the teenager fired the first shot. After having reviewed most of the witnesses’ statements, it appears that the descendant Mr. Hambrick discharged his weapon first, and as a result of that, there was an exchange of gunfire between him and two other individuals – good guys with a gun.

Portland, Ore., Feb. 19, 2022. Homeowner allegedly confronted participants at a racial justice demonstration Saturday night before pulling out a handgun and shooting multiple people in the crowd, leaving one woman dead and several others injured. The shooting ended when a person with the group of demonstrators who is licensed to conceal carry a firearm fired back, striking the homeowner in the hip. Again, a good guy with a gun stops the shooting.

Lancaster, Pa., October 17, 2021 on Sunday, October 17, four people were injured after a fight between two teenagers at Lancaster Park City Center Mall escalated into a shooting this past weekend. A 16-year-old, who was illegally carrying a gun, started the shooting, but it could have been much worse were it not for a concealed handgun permit holder. A bystander armed with a gun intervened in the shooting, shooting one of the participants.

The unidentified bystander who legally possessed a firearm had heard gunshots related to the fight between two males that knew each other, police said. The bystander remained on the scene until security and police arrived.

Syracuse, N.Y. Aug. 31st, 2021. The district attorney credited a property manager with saving the lives of several individuals after he pulled out a legally possessed 9 mm handgun -  the very gun that Joe Biden wants to ban – and fatally wounded a man who opened fire on a crowd outside a building.

San Antonio, Texas. Aug. 11, 2021. A woman who crashed into a parked car in San Antonio’s Westside neighborhood climbed out of her vehicle and began shooting indiscriminately at people who came out of their homes and rushed to aid her. The armed resident fired back and shot the driver to death, ending the violent threat to the neighborhood. That was a good guy with a gun or a good gal with a gun sometimes.

Fort Myers, Fla. July 22, 2021. A man who was a convicted felon and illegally possessing a gun fired multiple shots into a crowd before a bystander returned fire. When the bystander confronted the attacker, he stopped attacking and threw his gun in a parking lot. Fortunately, no one was injured in the attack.

Chicago, Ill. July 4, 2021. It seems likely that if the concealed handgun permit holder hadn’t intervened in this case, there would have been at least three deaths instead of just the one woman.

Arvada, Colo. June 21, 2021. The attacker and two other people were killed in this attack. A good Samaritan who was killed in a shooting in Arvada, Colorado. He did not hesitate. He didn’t stand there and think about it. He totally heard the gunfire, went to the door, saw the shooter and immediately ran in that direction. I just want to make sure his family knows how heroic he was. Taranto said he witnessed Hurley confront the gunman. Mr. Hurley shot him. I think I heard six shots from his gun, maybe five. Police chief said Hurley was a true hero, who likely disrupted what could have been a larger loss of life.

I’m running out of time, but Fort Smith, Arkansas. May 15, 2021. Zachary Arnold, 25, fatally shot Lois Hicks, 87, in her apartment, then began shooting other people in neighborhood apartments. Wallace A. West, 58, used a rifle, not a concealed handgun, to stop the attack.

Metairie, Louisiana. Feb. 20, 2021. Having murdered two people and wounded a couple of others. It’s clear that the attacker intended to kill as many people as possible. The quick response by people with concealed handgun permits stopped the attack.