Rep. David Rouzer: Dems’ $769B Spending Bill Is ‘a Bad Bill’ That Will ‘Draw the Economy Further Into the Ground’ 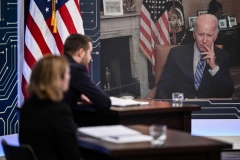 President Joe Biden participates virtually in a meeting with CEOs and labor leaders regarding the Chips Act, in the South Court Auditorium of the Eisenhower Executive Office Building, next to the White House, in Washington, DC, on July 25, 2022. (Photo by BRENDAN SMIALOWSKI/AFP via Getty Images)

(CNSNews.com) - The Democrats’ $769 billion social spending bill is “a bad bill” that will “do nothing but draw the economy even further into the ground,” Rep. David Rouzer (R-N.C.) said Tuesday.

“This is a bad bill. This is a really bad way to go. These extra taxes and increased spending are going to do nothing but draw the economy even further into the ground. So I'm very hopeful that the Senate will find a way to keep the bill from getting across the finish line in that chamber and send it back over to us,” the congressman told Fox Business’s “Mornings with Maria Bartiromo.”

“One of the big fears I have, one of the big concerns that I have is the number of people that are no longer participating in the workforce. I don't how we’re going to grow the economy and get out from behind this inflation crisis if we don't have workers, and so the policies that have been put into place have encouraged people not to work,” Rouzer said.

On the border, Rouzer said that it’s “just unbelievable” that hardly any of the Democrats have been to the border.

I don't know of one Democrat that's been to the border. Perhaps there’s one out there somewhere, but I don't know about them, and the fact of the matter is the border situation is a real crisis. I was down there a few weeks ago or last week rather with several of my colleagues.

It’s a humanitarian crisis, and effectively what has transpired here is you no longer have Border Patrol. They might as well be called border processing agents, because that's what they're doing. They’re spending so much of their time processing those who have come across.

Meanwhile, they can’t be out on the border doing the job that they are commanded to do because they’re totally completely overrun. So this is a real problem. For the life of me, I do not understand why the Democrats do not take this issue seriously. You got more than 500,000 getaways, and who knows if that's even close to an accurate count.

It's probably more like two or three times that, and of course, those who are gotaways, let me add this. There's no incentive not to turn yourself into Border Patrol. There’s every incentive to do that. When you’re fleeing Border Patrol it suggests that you're fleeing for a very good reason. You don’t want to get caught.

There's no doubt we have a number of terrorists who have crossed that border. Common sense tells you that, and I don't understand why Democrats won’t take this seriously.

The congressman said that when he visited the border, he saw a man trying to cross, who started to struggle and was saved from drowning.

We saw a number of infants and toddlers in the center where they were processing those who had crossed, and of course you have to think how many toddlers and how many infants have drowned that we don't even know about. So it's just really a humanitarian crisis. It’s a law enforcement crisis there.

Those the poor towns further inland are dealing with all kinds of human trafficking, drug smuggling, et cetera. We are enriching the drug cartels just so significantly, so much so that one of the law enforcement officers told us that the drug cartels were paying a young girl about 16 years old to transport drugs from point A to point B paying her $15,000, 10,000 to $15000.