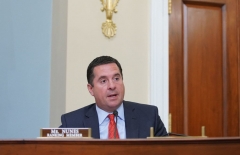 (CNSNews.com) – Rep. Devin Nunes (R-Calif.), ranking member on the House Intelligence Committee, said Sunday that he doesn’t know who made the decision to lift the pause on gain of function research between the United States and China in 2017 after U.S. diplomats in China expressed concern that the research could be weaponized.

On the issue of the origins of COVID-19, Nunes told Fox News’s “Sunday Morning Futures” said that “if you look at the circumstantial evidence, it's pretty clear that there wasn't some guy in a wet market in China that ate a bat. It likely didn't come from there.

“There's zero evidence of that,” he said, “but there's building circumstantial evidence that, indeed, this did come from a lab and indeed likely there was money that flowed from the U.S. government through nonprofits that was actually supporting this type of research that was going on in China. And, look, why is this important? This is about bioweapons. This is about biowarfare.

“This is very concerning, and I think what Senator Rand Paul was getting to, is this really something that the U.S. wants to be involved in and moving forward from here, we have to know the answers to this sooner rather than later, and the Biden administration needs to get to the bottom of it,” the congressman said.

“I think they are sitting on and suppressing a lot of intelligence that the American people should see in order to know how to move ahead over the coming next few years as China continues to gain control of the life science arena and the life science global economy. They’re trying to move all the technology back to China while at the same time not answering basic questions about the origin of this virus,” Nunes said.

The congressman sent a letter to President Joe Biden on Friday with 25 questions that the U.S. government should answer regarding the origins of the virus. He said the American people and U.S. allies around the globe who are still reeling from the virus have a right to know.

“I mean, every day people are still dying, and thank God most have been vaccinated or have actually contracted the virus and we are downhill slide here in the United States. That’s why it's so important to get the answers, so we know how to move forward from here,” Nunes said.

Host Maria Bartiromo pointed out that some of the questions in Nunes’s letter revealed that the United States was doing gain of function research with China, and then U.S. diplomats in China raised concern that the research could be weaponized and lead to a pandemic in the U.S.

Former President Barack Obama paused the research, but someone lifted the pause in 2017 during the first year of the Trump administration, Bartiromo noted. She asked who lifted the pause.

“So what we know is there was a program that was started between the United States and the Chinese government, so the Wuhan lab specifically and the University of North Carolina. Money was flowing through a nonprofit that was going into both of those,” Nunes said.

“At the time here in the United States, we thought that, oh, probably not a good idea that we convene and conduct that research here. So there was a pause put on it. Now at the same time all of that research should have been stopped including in Wuhan, but it was not. So that research likely continued for the next several years. I don't know who made the decision back in 2017,” he said.

“The media tried to perpetuate that, but what we have today, what we can say after a year of investigating and coming up with these 25 questions, there's clearly a lot of questions that involve a lot of circumstantial evidence. We have a lot of that that indicate that this originated in a lab. We have zero evidence that some dude ate a bat in a wet market,” the congressman said.

“And I think that's important to know, because what we are talking about here, is we are talking about very dangerous, potential dangerous leaks and also future biological warfare, -- which is really why the concerns that I have also about why is the Biden administration now taking U.S. technology that we developed, to develop a vaccine to the dangerous virus and now they are willing to spread this and allow the Chinese to have access to this technology? This is maddening,” he said.

Nunes said that the research that was put on pause in 2017 “had nothing to do with Wuhan.”

“The challenge was is that when it was banned here in the U.S. or put on pause, the Wuhan research was continuing and likely with U.S. dollars that we still don't have an accounting for. So that research, I assume, is being conducted here in the United States today, but the point here is when something wasn't allowed in the United States, it was actually going on in China,” he said.

“That's something that the American people deserve a right to know and whether or not taxpayer dollars were being used, because this type of activity, this gain of function is really weaponizing the virus, and I'm sure there's a lot of people who say on one hand, well, it could weaponized a virus and on the other hand you can come up with cures,” the congressman said.

Dr. Anthony Fauci denied last week that NIH funding was used for gain of function research at the Wuhan Institute of Virology.

Asked whether or not Fauci was lying, Nunes said, “We’ll see. My guess is that there was no money. They are playing word games here. As we know the U.S. institutions, the government agencies in the country have gotten really good at supporting Democrat socialist networks that they want to support so clearly they wouldn't want it out there that Obama was actually created the program, was sending taxpayer dollars to China.

“So what was likely happening, it was being routed through a nonprofit and then routed into China. Sound familiar? We have seen this before with the Democratic Party doing similar types of operations where they were funneling information to the media and then funneling it back into the department of justice. It seems like kind of the same-old play call,” the congressman said.

Nunes said he also wants to know whether the pause was lifted through a back door and whether former President Donald Trump understood that they were lifting the pause on research in the U.S.