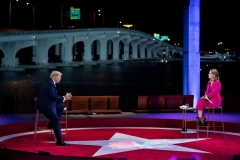 President Donald Trump gestures as he speaks during an NBC News town hall event moderated by Savannah Guthrie at the Perez Art Museum in Miami on October 15, 2020. (Photo by BRENDAN SMIALOWSKI/AFP via Getty Images)

In a Fox Business appearance on Friday, Collins was asked to give his opinion on the dueling town hall debates on Thursday.

“The first thing, I didn't know Savannah Guthrie was running for president. I thought she was there to actually moderate a town hall. Instead, looks like she's actually a third party candidate for president. She wanted to debate the president. That's not the job of a journalist, and then I don't know what to say about Stephanopoulos. He reverted back to Clinton-Gore days of press secretary,” Collins said.

“Really, to call himself a journalist after that last night and not even ask about one of the most pivotal things that you and I and many others have talked about over the last little bit, and that's Hunter Biden's and Joe Biden's connection to Burisma,” he said.

“We know Joe Biden lied when he said he had no contact with the Burisma folks, and we now see this a lot. Everything is falling apart for them, but yet mainstream and social media are ignoring it. It's an amazing morning to wake up in America,” the congressman said.

Fox Business host Maria Martiromo talked about the emails reportedly found on a hard drive of a laptop allegedly owned by Biden’s son, Hunter, which was dropped off for repair at a store in Delaware last year and never picked up.

The shop owner reportedly gave a copy of the hard drive to a lawyer for Trump’s personal attorney, former New York Mayor Rudi Giuliani, who gave a copy to the New York Post. The laptop and hard drive were in the possession of the FBI, it said.

BARTIROMO: Let's go through some of the e-mails. In one of the e-mails it goes through a list of people who are getting a stake, money, in this company, Burisma, and then at the end of it it says 10 held by ‘H’ for the big guy. What does that mean? The big guy?

COLLINS: Wow, isn't that a great thing to actually investigate. For those of us who have been saying that the real quid pro quo, is the Quid Pro Quo Joe in this issue, this is what we need to investigate. This is why this is important.

BARTIROMO: Well, I mean, you're right. Christopher Wray has been sitting on e-mails. You and your colleagues have been demanding these e-mails so that the American people could actually have a clear understanding of what took place. But they're not releasing e-mails. Same with Gina Haspel at the CIA. What are they worried about? Who are they protecting that Gina Haspel is stopping the dissemination of these important documents that you and your colleagues, Devin Nunes has been asking for, for months.

COLLINS: Yes. I mean, Devin, Jim, Jordan, myself, Matt Gates, we all have. What I've become concerned about is these folks are more concerned about protecting their agency than they are about protecting the American people. That has to stop. When you have department heads who are more concerned about the reputation of their agencies than they are about my rights and your rights and the truth being told to the American people, then it's time for cleaning out.
The last time we had to do this was back in the '70s when the intelligence community was used and our of Justice Department was being used in ways to spy on American citizens. It’s now time we go back in and to make sure we have proper controls, because they have now proven that even under this administration they're willing to slow walk stuff that they just don't want people to know. I'm tired of it.
It's just amazing to me that every time an onion layer is peeled back on this, what we’ve been talking about for two years and having the mainstream criticize us for it and make fun of us is proving true. I'm ready for mainstream media to actually report what they should be reporting.

Think about this. If Don Jr., Eric, Ivanka, any of those would have done anywhere remotely close to what Hunter Biden’s done, it would be day after day front page stories on The New York Times, and yet, all we see is crickets. The American people have had it with this.
BARTIROMO: Tucker Carlson did a look the other night of Hunter Biden's homes and the luxurious homes that he owns across the country. He's been a senator and in government for 47 years. What's the salary? I mean, to afford all of these homes. You know, Tucker was just questioning it. Bottom line, Congressman, what are you going to do about it? I mean is this resonating with the people, is this going to be an issue for the election and what are you and your colleagues doing to ensure that the American people understand what took place here?

COLLINS: We're going to keep doing what we've been doing, talking with you. I'm going to be on social media when they don't censor me. We’re gonna set and remind social media if they continue this censoring, Section 230 is gone, and they're the reason for it. We have to tell the American people by any means necessary, and yes, I do believe it will have an effect on this election.