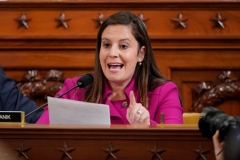 (CNSNews.com) - House Republican Conference Chair Elise Stefanik (R-N.Y.) called on the Biden administration on Thursday to do something about the nationwide baby formula shortage and to prosecute instances of stockpiling and price gouging.

“Right now, families across America are struggling to feed their babies due to a horrific nationwide baby formula shortage, and I cannot think of a more harrowing panicked crisis for parents to face than desperately trying to find food and formula for their newborn babies,” Stefanik said at a press conference outside the U.S. Capitol building.

“I’ve led on this issue since February, and we as House Republicans continue to demand answers from the FDA, and then surprisingly, when I reached out in February from my office to the FDA, we received no substantive response,” the congresswoman said.

“Joe Biden simply has no plan. In fact, when Joe Biden’s White House was asked about the shortage, they laughed, shameful. Make no mistake, there is nothing laughable or funny about this crisis,” she said.

Stefanik said that as a new mother, she understands “personally the severity of this challenge.”

“My son Sam is nine months old. He is formula fed, and even in my trips to the grocery store in upstate New York, the shelves have been fairly empty, and there was an article just today about families having to drive hours to access stores that have formula,” she said.

“Think about the cost of gas for families on limited income, so today House Republicans are here to push for action from the FDA and the Biden administration, who should have had a plan for this shortage months ago,” the congresswoman said.

“Instead, Bare Shelves Biden has continued to pass the buck. Biden and the FDA needed to work directly with the manufacturers and hospitals to make sure that we have an adequate supply of baby formula and make sure that parents know where to go if the shelves are empty at the store,” Stefanik said.

“Think about this … Babies have been put to bed hungry while parents are desperately trying to find alternative formulas that are often difficult to procure. This is not a third world country. This should never happen in the United States of America. We are unified in demanding action to address this crisis,” she said.

Reps. Stephanie Bice (R-Okla.) and Randi Feenstra (R-Iowa) introduced a bill called the Formula Act, which directs the Food and Drug Administration (FDA) to establish and communicate to Congress clear standards by which it domestically regulates infant formula.”

“These standards would in turn be applied to foreign infant formula to allow formula imports and support domestic manufacturers,” according to a press release from Feenstra’s office.

“Currently, the United States does not import foreign infant formula because the FDA does not have interchangeable standards in place to regulate foreign formula to ensure it complies with U.S. health code and regulations. By codifying standard regulations for infant formula, this legislation would allow America to safely import foreign infant formula to complement domestic production, particularly during times of severe shortage like American families are now facing,” the press release stated.