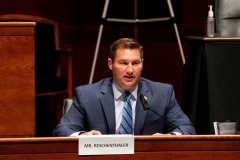 Rep. Guy Reschenthaler (R-PA) speaks during the House Judiciary committee hearing on "Oversight of the Department of Justice: Political Interference and Threats to Prosecutorial Independence", on Capitol Hill on June 24, 2020 in Washington DC. (Photo by ANNA MONEYMAKER/POOL/AFP via Getty Images)

(CNSNews.com) - The Democrats and the Biden administration’s answer to the oil crisis is to pressure people to buy electric vehicles, Rep. Guy Reschenthaler (R-Pa.) said Thursday.

As CNSNews.com reported, President Biden won’t be meeting with oil refiners today. Instead, Energy Secretary Jennifer Granholm will be, which Reschenthaler said is a calculated decision, because Biden can’t be seen “begging” oil executives to increase oil production, because he’s “beholden to his far-left radical base.”

“Let's be clear about something. Joe Biden, Secretary Granholm, the entire Democratic Party - this was by design that these gas prices increased, because for years we've been told that if only gas were $4 or $5 or $6 a gallon, it would speed the transition from hydrocarbon to so-called clean energy,” the congressman told Fox Business’s “Mornings with Maria Bartiromo.”

“This is what they wanted to do, and if you remember, about a year and a half ago, any time an oil executive came before a committee, the Democrats were asking how are you going to ramp down production [and] how are you going to get us off fossil fuels. So they have created this mess. It's unfortunate now that the American people are literally now paying the price for it at the pump,” he said.

Even if Biden reversed course on some of his energy policies, it won’t change the price of oil right away, Reschenthaler said.

This isn't going to change anytime soon because you just can't change the industry on a dime. For example, let’s just say OPEC in Saudi Arabia, which are at near 100 percent capacity, but let's just say they increased capacity hypothetically. You still would need to refine the crude oil that’s coming from Saudi Arabia and other places overseas.

“We don't have the refinery capabilities to do that, largely because bureaucracy, regulation, red tape has prevented us from even bringing in a new refinery in the United States for decades. Further, you just can't magically go and drill for example for natural gas and have the production start immediately.

It takes months and months to make sure that you have the drill site prepared, et cetera. What we should be doing is we should be reversing the regulation that Joe Biden put in the first place the ban for example on drilling on federal land should ease permitting for example and then reverse the decision on the Keystone XL Pipeline so we can actually move product.

That would take off some of the pressure but we can't be delusional. The Democrats have created this over a period of months and frankly years by driving down capital investment in the hydro-carbon energy. It’s gonna take awhile to get out of it.

The congressman said that “the Democrats know they're going to go into the minority with this election” and “get absolutely crushed in the midterm elections.”

“At the same time though, there's so beholden to the far-left radical base that it has declared war on oil and gas and all of the hydrocarbons et cetera. So there’s a disconnect there,” Reschenthaler said.

“Additionally, their answer to the problem - and you heard Secretary Granholm say this - everybody should be driving an electric vehicle, and I say this is the let them eat Prius Democratic Party, because they’re so absolutely out of touch with reality they have no idea the average person that can afford electric vehicle is making well over 100 figures a year,” he said.

He said that the Biden administration is using Russian President Vladimir Putin as a “scapegoat” for high gas prices and inflation.

“The problem they’re going to have is the American people are way too smart for this. Remember, gas prices had already risen about a dollar and 20 cents from the time Biden took office to the time Putin invaded in Ukraine, so the American people know that it was a rhetoric that Biden had on the campaign trail,” Reschenthaler said.

“For example, he said that wanted to phase out fossil fuels. He said he wanted to transition 100% to so-called clean energy. That rhetoric drove down investments and now he's paying the cost of not only the rhetoric but also the executive actions he took to restrict supply of petroleum and other hydrocarbons,” the congressman said.