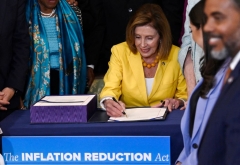 S Speaker of the House Nancy Pelosi (D-CA) signs the Inflation Reduction Act after the House of Representatives voted 220-207 to pass it at the US Capitol in Washington, DC, on August 12, 2022. (Photo by OLIVIER DOULIERY/AFP via Getty Images)

(CNSNews.com) – The $740 billion Inflation Reduction Act, which was passed by Congress last week, includes a $27 billion climate slush fund for the Environmental Protection Agency (EPA), which is three times as much as what the EPA gets a year in funding, Rep. Jason Smith (R-Mo.) said on Sunday.

“There's hundreds of millions of dollars to pay big, woke corporations to make their buildings green. That does zero for the supply chain crisis. There's $27 billion for a climate slush fund for the EPA. That is three times the amount of what EPA has a year in funding. That does zero to lower interest rates,” he told Fox News’s “Sunday Morning Futures.”

“It provides $7.5 billion for tax credit for electric vehicles, and people who make up to $300,000 a year qualify, but it also pays those wealthy people $1.3 billion in tax credit to sell their used electric vehicles. The waste goes on and on. It's a disaster,” the congressman said.

Smith called the bill “a disaster for everyday Americans who are suffering and struggling to just put food on their table and clothes on their backs.”

“This bill will only make inflation increase and will prolong the inflation crisis that we're in. We're currently at an inflation of 13.7% since Joe Biden's taken the oath of office. This bill will spend over $745 billion. It will add taxes and budget offsets of $599 billion, and who benefits from this? Wealthy Americans and the big corporations, and who will pay for this?” he asked.

“Low- and middle-income families with more tax increases and more audits. It's a disaster for America. You cannot spend your way out of inflation, and you definitely can't tax yourself out of it, out of a recession, but this is the Democrats' recipe, is basically pass a climate bill that spends more than $400 billion for their pet projects,” the congressman said.

On President Biden’s claim last week that there was zero inflation in July, Smith said that the Biden administration “administration makes all kinds of weird statements.”

“They said that the original Build Back Better bill would cost zero as well, but it cost $5.1 trillion. I would tell him to talk to any hard working American and to see what they think inflation is. In fact, they know that going to the grocery store, everything's costing more,” the congressman said.

“That same fuzzy math that he used to try to say inflation’s zero percent, if you use those same numbers, bread would be up 33%. Eggs would be up 51. Electricity up 22% under the same math year to year. Inflation just this week came back at 8.5%. He's probably given the wrong advice once again,” he said.

On the Inflation Reduction Act, Smith said, “According to joint tax, almost half of the entire taxes coming out of the $599 billion will be paid by people making less than $400,000 a year.

He said that “it seems that most Americans are going to face the heat of this horrible tax and spending piece of legislation.”

The congressman also said that Republicans are rallying behind former President Donald Trump after the FBI raid on Mar-a-Lago and because of the anticipated hiring of 87,000 IRS agents to the federal government.

“I'll tell you right now people are getting behind President Trump, because they do not like the heavy hand of government going after individuals whether it's a former president or whether it’s just an everyday American,” Smith said.

“That is why they are so upset and so worried with about 87,000 more IRS agents to look underneath every one of their couch cushions. They don't like what happened on Monday to president trump. They don't want that to happen to themselves either,” he said.