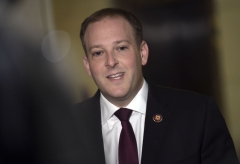 “And then on Fox is Jeanine Pirro talking about soft-on-crime consequences. I mean what does that even mean? Right? So there is an alternate universe on some coverage. What is scary about it a lot of people watch that and they think that the president isn't doing anything to address people’s safety in New York, and that couldn’t be further from the truth,” Psaki said last week during an interview on “Pod Save America” on Jan. 25.

Cashless bail has led to a rise in crime in major U.S. cities like New York, and it was part of the Biden-Harris agenda to implement nationally, Zeldin told Fox Business’s “Mornings with Maria Bartiromo” on Tuesday.

“What the policies are would be cashless bail throughout state. We have a Manhattan district attorney who’s refusing to enforce laws across the board. There are a bunch of other crimes that he’s reducing. So you have policies like that,” he said.

“They’re releasing people early from prison. That’s a new bill that was signed into law by Governor Hochul, called Less Is More. When she signed it, she released 191 people from Rikers Island, and a whole a bunch of them immediately went out to commit additional offenses. Now this list is long of what the soft-on-crime policies are,” Zeldin said.

“As far as what the consequences are which Jen Psaki is laughing off, it’s no laughing matter when people get pushed into incoming train in the subway and they end up losing their life as a result,” the congressman said.

“The small business in New York City that has to go out of business because just too many people are walking in, and stealing too much, out the door, no consequences, people who were getting punched in the face because they are Asian or because they’re Jewish. So we know what policies are consequences are, but we don't have the will of many of these elected officials to do something about it,” he said.

Bartiromo played several clips of Democratic politicians called for defunding the police, including Vice President Kamala Harris saying, “We have to reimagine public safety and how we do public safety in our country.”

Zeldin noting that in New York City, over $1 billion came out of the NYPD budget as a result.

“The cashless bail, is -- not just something we see in New York, but that was actually part of the Biden-Harris agenda to implement nationally, so these policies that we’re seeing out of blue states, blue cities can be coming to the rest of the country if these different Dems you just played clips from had their way. These are not rank and file members without any influence. These aren't backbenchers,” the congressman said.

“There are people who are leading the Democratic Party. They might be newer members of the House. Maybe they’re in their first term or second term, I have seen firsthand on the floor of the House of Representatives, where you know six other Democrats are in line, to kiss the ring of AOC because they -- that group of people that’s their insurance policy, if they have a primary the next time they have to run. They have outsized power. This represents a lot of what party is about right now,” he said.