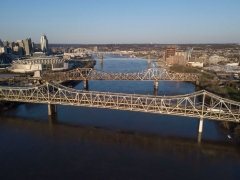 The Brent Spence Bridge spans the Ohio River on the Ohio-Kentucky border in Cincinnati, Ohio on April 2, 2021. (Photo by JEFF DEAN/AFP via Getty Images)

(CNSNews.com) - Rep. Liz Cheney (R-Wyo.) said the Democrats’ infrastructure bill would have to be “fundamentally redone” for her to support it and actually focus on infrastructure, because as it stands now, less than six percent of the bill does.

During an interview on CBS’s “Face the Nation” on Sunday, host Margaret Brennan pointed out that Cheney was in favor of a trillion dollar infrastructure proposal during the Trump administration in 2017, but nothing came of it.

When asked why she’s opposed to it now, the congresswoman said, “Well, it's a very different proposal, obviously. Something less than six percent, as you mentioned, of this proposal that President Biden has put forward is actually focused on infrastructure.

“The National Association of Manufacturers has said that we will probably lose over a million jobs if this is enacted, and you are certainly going to see in addition to the corporate tax increases in the bill, you'll see middle-class tax increases,” she said.

“This is a pattern that we watch the Democrats use time and again, where they massively increase spending. They massively expand the size and scope of the federal government, and then they come back around and impose middle-class tax increases. So those are not things that we support, not things that I support,” Cheney said.

Brennan asked if House Speaker Nancy Pelosi (D-Calif.) offered an olive branch and take the corporate tax rate down to 25 percent from 28 percent whether that’s something Cheney can work with.

“You know, we have already, as you pointed out, appropriated trillions of dollars since January and last year as well. I'm really concerned about the impact on the economy, the potential inflationary pressure that we might see with this additional injection of cash, and so much of it is unnecessary. Six percent is actually focused on the kind of infrastructure that there is bipartisan support for. So I would urge Democrats, let's focus on that,” she said.

When asked whether paid leave - a long-term goal of Pelosi’s - is something she can get on board with, Cheney pointed out that “there are fundamental differences in how the Democrats and the Republicans approach the economy.”

“But as you know, that was so key when it came to female employment in this past pandemic-related contraction. Isn't that something that you think is necessary?” Brennan asked.

Cheney said it’s important to provide opportunity for everyone, “and I think that, you know, one of the things the Democrats often do is they sort of try to segment women out and say, ‘Well, these are the women's issues.’

“I think that women need to be in a position where they know that their elected officials are doing everything possible to keep them safe, to keep the nation safe, to get their kids back in school. If you want to talk about what is really going to help women get back to work, it's getting schools open again,” she said.

“And Speaker Pelosi, four times now since January has blocked the Reopen Schools Act from consideration on the House floor. Those are the kinds of things we ought to be focused on,” Cheney said.