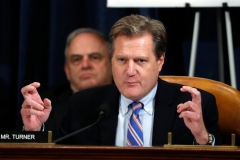 (CNSNews.com) - Rep. Mike Turner (R-Ohio), ranking member of the House Intelligence Committee, said Friday that Republicans on the committee have requested that the FBI disclose “the national security basis” upon which the raid on former President Donald Trump’s home was ordered.

Turner said that he and other members of the committee “are in full support of the men and women who everyday work to keep our nation safe at the FBI and Department of Justice, and we condemn any actions of violence against any law enforcement personnel.”

“Having said that, we have serious questions concerning the actions taken by Director Wray and ordered by … Attorney General Garland to raid Mar-a-Lago and the personnel residence of Donald Trump. All, both of them are subject to oversight by Congress, and it is our job to ensure that they are not abusing their discretion or politicizing the powers that we have given them,” he said.

“Earlier this week, we requested that they disclose to our committee the national security basis upon which they have ordered this raid,” the congressman said at a Capitol Hill press conference alongside other GOP members of the committee.

“Because many other options were available to them, we’re very concerned of the method that was used in raiding Mar-a-Lago in the nine hours that transpired while they were in the former president’s home, and we are glad that Attorney General Garland has begun the process of releasing some of the information to the American public and the American public deserve answers, and certainly, our responsibility as Congress is to make certain that we provide appropriate oversight,” he said.

“They will be releasing apparently the warrant and inventory, but it will still leave many unanswered questions. That’s why our request remains that the director of the FBI and the attorney general disclose to this committee the imminent national security threat upon which they based their decision to order a raid upon the president’s home, again underscoring that there were many other options available to them,” Turner said.

“Next, we are also very concerned about the disturbing reports that there was an informant, perhaps even somebody undercover at Mar-a-Lago or around former President Donald Trump, and today, we are also sending a letter to Director Wray demanding that he disclose to us the process in which that informant was utilized or that informant was placed. What is the relationship between the FBI and the person that was reportedly been utilized in this process,” Turner added.