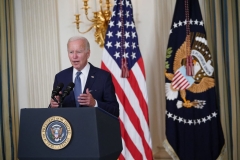 President Joe Biden speaks during a signing ceremony for H.R. 5376, the Inflation Reduction Act of 2022, in the State Dining Room of the White House in Washington, DC, on August 16, 2022. (Photo by MANDEL NGAN/AFP via Getty Images)

(CNSNews.com) – Rep. Nancy Mace (R-S.C.) accused President Joe Biden and his administration of lying Wednesday about the impact that the Inflation Reduction Act will have on inflation as well as that there was zero inflation in July.

“Well, it's all a lie, honestly. Biden pinky promises that he will reduce inflation with the Inflation Reduction act but the truth is inflation will be affected by 0.25 percent, a quarter of a point in 7 or 8 years so it is not going to have an immediate impact. This is all about November and trying to get momentum, and when Biden says that there's zero inflation, the truth is that was a lie too. July was 8.5 percent,” she told Fox Business’s “Mornings with Maria Bartiromo.”

“I went to the grocery store yesterday with my kids, and eggs were up almost 50%, we spent $250 to $300 on groceries more than we spent in I can’t tell you when for the week, and every family is facing those same challenges when they go to the store. They are making tough decisions on what they buy and don't buy, but we are seeing the price increases exponentially at the gas station and grocery stores,” the congresswoman said.

Mace said that if the Biden administration really wanted to stop inflation, it could cut taxes and spend money that it already has.

“The CBO, Congressional Budget Office, when they were detailing the cost of this bill, they even have the final numbers. We’re talking $485 billion. We are talking about taxes that will be raised on the American people when you have a subsidy, when you're taxing businesses large and small, somebody is going to pay that bill, and it's going to be working families and individuals in this country,” she said.

“Inflation will continue to go up, because deficit spending is a major contribution to inflation. It's why we’re here in the first place. So are higher taxes. There were 42 new taxes in the inflation bill just last year and not to mention the Federal Reserve is printing trillions of dollars every single year. All of these things are affecting inflation,” the congresswoman said.

“If we were going to really try to stop the buck and stop the tide and stem the tide of inflation, we would be cutting taxes. We wouldn't be doing deficit spending. We wouldn't be spending money we have, not money from China and elsewhere, but that's not what the Biden administration is doing and it will harm workers across the country exponentially now and in the future,” Mace added.

On the issue of the border, the congresswoman responded to news that the amount of fentanyl seized at the border last month was more than a 200 percent increase month over month.

“We had one hearing on the oversight committee last year. It was about the northern border rather than the southern border, and this summer the statistics are telling us that we’re going to have over 2 million illegal immigrants apprehended this summer, far surpasses where we were in total for last year,” Mace said.

“We just had a police officer was sickened by fentanyl, exposure to fentanyl on a drug bust just a couple of weeks ago in the state of South Carolina. I just had a friend bury his son via a fentanyl overdose. This is an epidemic and a tragedy that's affecting every family across the country whether they are on the border or not, and as you mentioned, the Biden administration is visiting 23 states to tout the Inflation Reduction Bill, and they are not even bothered,” she said.

“Biden can’t bother to go to the border today. I will be there in a few days checking it out again, but our president needs to lead our country out of this mess instead of leading it into it,” the congresswoman said.