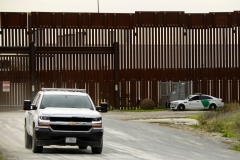 A US Border Patrol agents monitor from a vehicle a section of the US-Mexico border wall near Otay Mesa between San Diego and Tijuana on January 12, 2022 in San Diego County, California. (Photo by PATRICK T. FALLON/AFP via Getty Images)

(CNSNews.com) - Rep. Nancy Mace (R-S.C.), who sits on the House Oversight Committee, said Wednesday that they had one hearing on the border last year, but it was the northern border with Canada, not the southern border.

Mace said that Americans are suffering because of Democrat policies.

“I mean, what has the left done for the American people over the last year? Because it's not just Nancy Pelosi's district that's suffering. It's every city across the country has seen a massive spike in crime. We've seen that on the streets of every major city in the U.S. over the last two years,” the congresswoman said.

“So I would tell you the leftist policies that Nancy Pelosi has been leading have been a disaster for her district but for every hard working American in this country,” Mace said.

The congresswoman said Republicans need to win back the House and reverse the Democrat policies that have had “disastrous consequences.”

“Well, last week even, and the State Department had to correct President Biden, what he said at his press conference, said everyone was on pins and needles for the –you know he showed the entire world including Putin his hand on Ukraine, and the hand was empty at that point, and they’ve had to walk many of the statements back, which is really scary when we're talking about the world stage and real threats from Russia and from China when we have our own crises here at home,” she said.

“The number one thing that we need to do is Republicans need to win back the House this year to revert and reverse some of these horrific policies that we’ve seen that have disastrous consequences at the grocery store, at the gas pump, on our jobs and wages,” the congresswoman said.

“The second thing that Republicans need to do, it's not enough to bash the left or to bash Nancy Pelosi or President Biden's bad policies. We actually have to come up with solutions for inflation and maybe talk about curbing the spending, because Republicans and Democrats for decades have contributed to out-of-control spending,” Mace said.

“We’ve contributed to higher taxes in this country and so what are we going to do that's better that will create better and healthier families, better workforce, better jobs, better wages, and reduce and reverse some of the inflation that we're all seeing and also address the border. These are things that Republicans need to have solutions for going forward in the midterms, not only to get elected but actually to do something when we do have that power, when we are in the majority next year,” she said.

Mace said that Biden “would have higher approval ratings if he admitted some of the mistakes and blunders of his administration in the first year.”

“Last week, he said inflation was not existent. It was just a media craze or media frenzy showing empty shelves. I can tell you when I went to the grocery store a few days ago, I couldn't get about 25% of the items my kids and I wanted for the house to eat over the weekend, so I see it every day. Hard working families see it,” the congresswoman said.

“He also blames supply chain issues for inflation. That's part of it, but the spending that we're talking about, what we've done over the last years and during COVID and the Build Back Better, any future spending, the taxes that were in the infrastructure bill, 42 new taxes, all of this is contributing to our inflation woes, and wages cannot, simply cannot keep up,” she said.

“So he wants to blame everyone but himself, and I appreciate when there's alleged things that are happening in industries that shouldn't be - price gouging, et cetera - but what is he going to do to fix it. This is his problem, not theirs,” Mace said.

The congresswoman said that she wants to put together a tax cut proposal like a “a fair rate of consumption tax, flat tax or a fair tax.”

“When you look at – and I explained this to my kids – and when they look at their allowance, which is $10 a week, and if I were to take half of it right off the back for the federal government and then you’re going to pay mom a tax every time you need something or want to buy something, they're like oh, my gosh, we're only left with a few dollars, and I'm like, ‘Of course. This is how the government works,’ but they're not there yet,” Mace said.

“One of the big things I would like to see happen, I'm a big fan of the Penny Plan, and I think this would, balancing the budget would go a long way. It could be bipartisan but the penny plan would take a penny off for every future dollar of federal spending. You balance the budget in five, six or seven years and then after that you can increase spending by 10% and change annually,” she said.

“That's something that I believe that Democrats and Republicans could work together and would go a long way to helping fix some of our economic woes,” the congresswoman added.