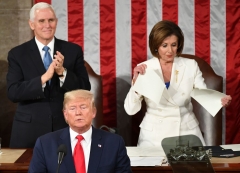 Vice President Mike Pence claps as Speaker of the US House of Representatives Nancy Pelosi appears to rip a copy of US President Donald Trump's speech after he delivers the State of the Union address at the US Capitol in Washington, DC, on February 4, 2020. (Photo by MANDEL NGAN/AFP via Getty Images)

(CNSNews.com) – Rep. Nancy Mace (R-S.C.) told NBC’s “Meet the Press” on Sunday that there was a “bicameral, bipartisan effort” to look at censuring President Donald Trump, which she said would hold him accountable and prohibit him from holding office again, but House Speaker Nancy Pelosi (D-Calif.) wouldn’t bring it up for a vote.

“Well, one of the things, one of the options that was on the table last week when we were going through the impeachment, getting up to D.C. for that, was that there was a bicameral, bipartisan effort to look at censure as an option. That would one, hold the president accountable for his words and his actions and two, also prohibit from holding office again in the future,” she said.

“Unfortunately, the speaker wouldn't let us bring it up for debate or bring it up for a vote. There were measures, there were folks in place in both chambers, in both parties, that were willing to do that and go that far, but unfortunately, we didn't have the opportunity at all last week,” the congresswoman said.

Mace, who voted against impeaching the president, said she’s concerned like Rep. Michael McCaul (R-Texas) is that more facts will come to light in the future and it will put her on the wrong side of the debate.

“Yeah, I am concerned, and one of the things -- I gave my first speech on the floor of the House last week. I didn't want to do that as a freshman one week in, but I stated very unequivocally that the House has every right to impeach the president of the United States, but the fact that we bypassed judiciary, we did not open up an investigation, that we bypassed due process -- that set a dangerous constitutional precedent for others,” the congresswoman said.

“No matter -- even if you think the president is guilty as hell like many do believe -- there has to be due process. There has to be an investigation. We have to go, even if it's through special committee work or judiciary. Those things needed to happen in order for impeachment really. I think you would have gotten more Republicans on board if it were done with due process and with an investigation,” she added.

Mace said that the option to censure Trump should have been up for debate.

“It's complex, constitutionally, but there were folks in both chambers and in both parties having the ability to look at that as an option, but we couldn't even bring it up for debate or look at that as an option because we were really trying hard to figure out, ‘How do we, how do we hold a president accountable that put all of our lives at risk?’” she said.

“And this was a traumatic event for many members of Congress, and I believe in the days, weeks and months to come, as we learn more, the worse it's going to get, and we feared for our lives, many of us that day, and our staff, and, as you know, my children were supposed to be up there, and if they had been, there like they were supposed to be, I would have been devastated,” the congresswoman said.

“And so, we do need to find a way to hold the president accountable, and we're doing that in the press, and you're seeing corporations and companies say, ‘not one more dime to those that objected, we're going to do the right thing.’ So, there are other measures that I'm encouraged by seeing out there,” Mace said.
“I want to be a new voice for the Republican Party, and that's one of the reasons I've spoken out so strongly against the president, against these QAnon conspiracy theorists that led us in a constitutional crisis. It's just wrong, and we’ve got to put a stop to it,” she added.

“I will tell you for me, as a new member, it was enormously disappointing. I literally had to walk through a crime scene where that young woman was shot and killed to get into the chamber to vote that night to certify what was supposed to be a ceremonial vote to certify the Electoral College, and yet, my colleagues continued to object, and they knew this was a failing motion,” the congresswoman said.

“These objections were not going to work, and they were unconstitutional, and so it is enormously disappointing. It’s one of the reasons I’ve been such a strong voice to point out the lies that have happened. Congress had no business overturning the Electoral College and neither did the vice president, and I praise Vice President Mike Pence for standing up and correcting some of those untruths that day, on January 6th, but we have reconciliation that needs to happen within our own party,” she said.

The congresswoman said she believes Rep. Liz Cheney (R-Wyo.) will survive any challenges to her leadership position.

“And the irony in all of this, Chuck, is that the same people that were complaining and screaming about the president being silenced on Twitter want to silence a dissenting voice within our own party, and so, I find, I find that very hypocritical and very disappointing, because we should embrace dissension. We should embrace debate,” Mace said.

“Part of the American experiment in this country is the ability and opportunity to debate ideas. Even when we disagree, we have the ability to agree to disagree and not attack one another, and there's so much division, not only within our party, but within our country right now, and we've got to do a better job, and I hope and I support Liz Cheney, and I hope that she stays a part of leadership. We need these voices right now more than ever,” she said.