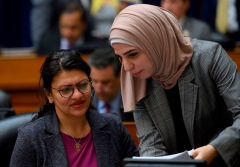 S Representative Rashida Tlaib(L) (D-MI) speaks with an assistant during a House Oversight and Reform Committee hearing concerning government preparedness and response to the coronavirus, in the Rayburn House Office Building on Capitol Hill March 11, 2020 in Washington, DC. (Photo by ANDREW CABALLERO-REYNOLDS/AFP via Getty Images)

(CNSNews.com) – Palestinians living in Israel are having “their January 6th” daily – a reference to the Capitol Hill riots - because their neighborhoods are “being attacked by mobs solely” because of their ethnicity, Rep. Rashida Tlaib (D-Mich.) told MSNBC’s “The ReidOut” on Monday.

Tlaib said that “the continued back-and-forth and the rhetoric” denies Palestinians “their humanity.”

She said she wishes people would “listen to the Palestinian voices on the ground, to talk to the mothers who try to put their children next to them because if they die, they want to die together, to talk about a son who was buried with his mother, and he watched his mother die because as they were buried under the rubble, she was taking her last breaths, and he said, ‘please don't leave me.’”

“Those are the kinds of stories that need to be told behind the bombing, that under the rubble are, you know, family members. I mean I'm watching over and over again images of people, citizenry in Haza pulling huge concrete for eight hours to pull a 6-year-old girl out of the rubble or to watch a hospital continue to watch their doctors and others targeted. Just today, Joy, the Israeli government targeted two schools. I don't even know -- the United Nation schools,” she said.

“These are where many of the people who were bombed out of their homes were taking refuge. The continuation and targeting of so many families and children is not going to give anybody a sense of security, but it's also really important, Joy, to know that Israel's own human rights organization has said that Israel is an apartheid state. The Human Rights watch just came out with a report saying that,” Tlaib said.

“This form of oppression, the chronic poverty that comes with it, the discrimination and racism that comes with it, this is what leads to a lawless, you know, not held accountable country of Israel which continues to be like the fourth largest military, you know, a superpower in the region, and they seem to be dead on set to deny Palestinians their humanity,” she said.

Host Joy Reid said she wonders “when you see 28 Senate Democrats sign a statement saying, you know, that there should be a cease-fire, which seems like a step forward, but then when you see the White House put out two statements so far, the second of which reads much like the first, the president reiterated his firm support for Israel's right to defend itself against indiscriminate rocket attacks.

“He encouraged Israel to make every effort to ensure the protection of innocent civilians. This is a member of your party,” Reid said. She asked whether Tlaib felt any empathy coming from the White House and whether they called the congresswoman given that she has Palestinian family members living in the Middle East.

Tlaib said, “They are engaging me now finally after four months of me sending letters with colleagues, talking about home demolitions, talking about the attack on Palestinians living in Israel. I mean their January 6th is happening right now daily in their lives and their own neighborhoods being attacked by mobs solely because they're Palestinian, their ethnicity.

“They're targeted because of their ethnicity. You know, Joy, it is really hard because any of my colleagues that even have a sort of empathy towards Palestinians, they do it quietly with whispering because they continue to be intimidated and bullied by those that want to continue the status quo of apartheid in Israel,” the congresswoman said.

“They want to continue to have that power and hold, and they literally brush over Palestinians as somehow inherently violent, that they don't deserve human rights, and that's what's missing in the statements coming from President Biden,” she said.

“And, Joy, you saw in the month of Ram adan, holy month of Ramadan for Muslims, worshippers kneeling to pray to God are being attacked by the Israeli government prior to all the other attacks that happened. A lot of that is stemmed in the continuation of racism and policies within Israel being led by the right-wing party of Netanyahu,” the congresswoman added.

Reid asked whether Tlaib was surprised that Israeli Prime Minister Benjamin Netanyahu’s own politics don’t change the way the U.S. deals with Israel.

“Absolutely. It's shocking. The hypocrisy of us saying that we need to be stewards of human rights except for Palestinians, and they're taking orders. That's exactly what's happening. They're taking orders from Netanyahu, who is on corruption charges from stealing from his own people, the people he's supposed to be representing,” Tlaib said.

“And currently many of the Israeli media, folks in Israel have been more critical of Netanyahu's right-wing policies, his corruption, more than here at home in the United States. So I hope that my president, our president, speaks up and speaks truth about what exactly is happening because I know they know,” the congresswoman said.

“And I know they're enabling it by sitting there and saying these kinds of passive language that is not going to hold a lawless, very much a corrupted country right now that has set an apartheid state. It is very clear to many of the people that live there, including some of the Israeli citizens who have came out and opposed Netanyahu very forcefully, that enough with this kind of discrimination and racism,” she said.

“These are our neighbors. These are children that we're raising our children with. Enough. You know, Joy, it's hard because, you know, as I talk to my Palestinian family at home, they tell me, please don't cry for us. And I was like, of course I'm going to cry for you. This is -- you know, I want you to know that there are Americans here that care about you,” Tlaib said.

“There are millions of Americans that believe in me, in what I'm saying, that we got to stop investing in an apartheid state of Israel, that we need to condition that money, that we continue to send weaponry and assault weapons to Israel, that continues to target innocent lives. And so, joy, it is so incredibly hard because when I got elected, it was my cousin that said, you know, Rashida, we actually thought Americans turned their backs on Palestinians until you got elected,” she said.

“Now we know that it isn't everybody here in the United States, and I want to make it clear to all the Palestinians. I know it's hard to hear now under attack. But Americans are standing strong, and they're standing and saying, enough, President Biden. You will not do this on our watch. You have to speak out against this violence in a very aggressive way that holds Netanyahu and his leadership accountable,” Tlaib added.