Rep. Ro Khanna: ‘This Court Has a Crisis of Legitimacy’ 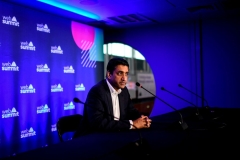 (CNSNews.com) – Rep. Ron Khanna (D-Calif.) called into question the legitimacy of the Supreme Court on Thursday, adding that it “no longer has the confidence of the American public.”

The congressman is calling for term limits on Supreme Court justices following its decision to overturn Roe v. Wade and its latest ruling on the EPA.

As CNSNews.com previously reported, the Supreme Court ruled that the Environmental Protection Agency exceeded its authority by trying to regulate climate change through the Clean Power Plan, which cut power plants’ carbon emissions.

Appearing on CNN’s “Don Lemon” show, the congressman said that Supreme Court Justice Elena Kagan “summed it up best in her dissent.”

“She said, this is a court that doesn't know much about climate change. I mean they're not scientists, and they're basically handcuffing the EPA. They're saying the EPA can't have emissions regulations on coal plants system-wide. They can't have caps. So this is going to mean that there's going to be no regulation, no caps on carbon emissions, and it's devastating for the fight against climate,” he said.

Khanna answered affirmatively when host CNN Don Lemon asked if he’s worried that the ruling will disadvantage people of color even more, because a 2021 American Lung Association report found that they are more likely than whites to live in a county with a failing grade for at least one pollutant.

“I just want to ask you this, because, listen, it sounds almost similar to when Democrats say a crisis of legitimacy, similar to the former president saying just because he didn't agree with something, that it was illegitimate, that it was fake, or that it was -- it's not -- you don't think that's a slippery slope you're going down by saying that the Supreme Court is a crisis of legitimacy? It may not be popular,” Lemon said.

“What I'm saying is this court no longer has the confidence of the American public, and we need to have fundamental reform and like Lincoln called out the Dred Scott court and FDR called out the Lochner court, we need to be campaigning against this court,” the congressman said.

“We, the people, the American people who get to decide about fundamental rights and get to decide about the Constitution, get to direct policy about climate. It's not unelected justices who are taking away too much power, and I think they're doing their jobs incorrectly, and we ought to point that out, and they're partisan. They're partisan. They're not some deliberative body,” he said.

“They are -- they are following a partisan agenda, and they're not -- they shouldn't be treated as some holier than thou people with some deliberation. They are ideological,” Khanna said.