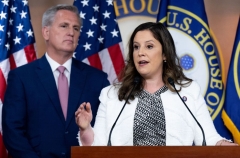 “House Republicans are committed to immediate oversight, accountability and a fulsome investigation to provide needed transparency and answers to the American people regarding Joe Biden and his administration’s weaponization of the Department of Justice and FBI against Joe Biden’s political opponent,” she said.

“President Donald Trump is Joe Biden’s most likeliest political opponent in 2024, and this is less than 100 days from critical midterm elections,” the congresswoman said at a press conference with GOP members of the House Intelligence Committee.

Stefanik called the raid “a complete abuse and overreach of its authority.”

“As the American people know, unfortunately, this is the same agency leadership that protected Hillary Clinton, James Comey, and continues to protect Hunter Biden, the same agency leadership that perpetrated the false Russia hoax for years, and it’s not just these national issues that have led to historic distrust among the American people. It’s local issues as well, like in my district, the FBI’s leadership overreach and politicization continues to occur,” she said.

“The FBI continues to stonewall a critical investigation. They’re stonewalling providing investigation and transparency into their role in the deadliest car crash in years where they mishandled a longtime FBI informant, and while some of you national reporters may not know this issue, for reporters in the media in my district this is one of the most important FBI issues that we’re facing in upstate New York,” the congresswoman said.

“The American people are smart, and they have had enough. It is unfortunately why there is a fundamental lack of trust in these agencies, and the American people deserve answers. A House Republican majority will leave no stone unturned when it comes to transparency and accountability into the brazen politicization of Joe Biden’s DOJ and FBI targeting their political opponents,” Stefanik said.