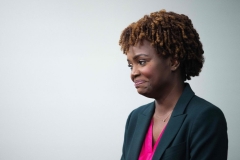 (CNSNews.com) - The Biden administration keeps urging people to reduce their reliance on fossil fuels by driving an electric vehicle, but not everyone can afford one.

“The average price for a new electric vehicle – over $65,000 according to Kelley Blue Book estimates – is well above the industry average and more aligned with luxury prices than mainstream prices,” the KBB website says.

When asked whether people are supposed to choose between $5 a gallon gas or a $60,000 electric vehicle, White House Press Secretary Karine Jean-Pierre said that’s an “apples and oranges” comparison.

“The president yesterday was talking about this transition to greener energy some day. A lot of people can’t afford a $60,000 electric car, and they also are having a hard time importing gas right now. That sounds like a painful transition, so how much of that kind of pain is the president okay with?” Fox News White House Correspondent Peter Doocy asked.

JEAN-PIERRE: No, that transition. We are in a transition to clean energy. That is something that is important. It is going to create jobs. When you think about electric vehicles, it is going to give families some tax credits. It’s going to be really important to have.

JEAN-PIERRE: We’re going to continue to move forward with what we have put forward, the bipartisan infrastructure–

JEAN-PIERRE: That is not– first of all, you’re, you’re— that’s apples and oranges. It’s not the same. What we’re trying to do right now is to deal with an acute problem right now, which is why the president again asked for a 90-day suspension of the gas tax, the gas tax holiday. It is going to make a difference.