Reporter: Who Will Pay for Mandatory Weekly COVID Tests for Businesses? Psaki: ‘Vaccines Are Free’ 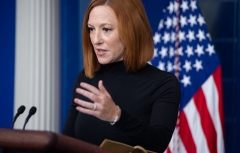 (CNSNews.com) - White House Press Secretary Jen Psaki said Friday that businesses that are worried about the costs of requiring their employees to test weekly for COVID-19 will find it much cheaper to require that they get vaccinated.

As CNSNews.com previously reported, President Joe Biden announced Thursday that he is mandating vaccines for the entire federal workforce and federal contractors.

Furthermore, Biden called on the Labor Department to require all employers with 100 or more employees to ensure their employees are fully vaccinated or show a negative COVID test once a week.

PSAKI: Well, the vaccines are free and available to everyone in the country, so that shouldn’t be costly or available or---

ALEXANDER: What if they’re given an opt-out? They want to do the weekly tests. You couldn’t say earlier who would pay for that test. Businesses are saying, how do we get these tests to our employees? What if our employees don’t want to pay for it themselves? Do we have to pay for it? What does that cost us at the end of the day given that they have the right to opt out?

PSAKI: They have to make that decision themselves. It’s certainly more cost effective to require vaccines. They may not decide to do that. That’s up to them to decide to do.

ALEXANDER: So ultimately, the burden’s on that business to make that decision or just swallow the cost?

PSAKI: Correct. Most of these businesses can absolutely afford it, and what we’re talking about here is saving people’s lives and protecting them. I’d also say there are a number of companies that have already applied this, have already put requirements in place. It makes for safer workplaces. It makes people want to come back to the workplace, makes for healthier and happier employees who know they’re safe when they go to work, and that’s a cost as well.

ALEXANDER: Obviously testing is cheaper for a place like United. They can afford it more easily than a place that’s only 100 people big. That’s why I asked.

PSAKI: I understand, but again, vaccines, free, available everywhere in the country. Requiring that is free and shouldn’t cost businesses any money.

ALEXANDER: Understood. Religious exemptions right now. Can you give us a better understanding? How would that work? I know how you just said there would be religious exemptions that would exist for federal workers and the like. How about for megachurches and other religious organizations in this country with more than 100 employees? What right do they have under these yet-to-be created rules?

PSAKI: Again, the rules are still being created, but we have obviously had religious exemptions even for federal employees. I’;m sure that will be a factor taken into consideration, but I can’t make a prediction for what the final rules will look like.

ALEXANDER: The intention is I presume that if you're a religious organization. You say, hey, we don’t want to have to do this in our organization.

PSAKI: Again, this is going to be for OSHA to determine as they’re doing the rulemaking and the Department of Labor, so I will not get ahead of that process.