Romney: Biden’s Mistake Was Continuing ‘Policy of Prior Administrations Not to Provide the Defensive Weapons Ukraine Needed’ 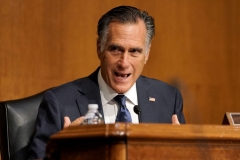 (CNSNews.com) - It wasn’t a mistake for President Biden to rule out U.S. troops on the ground in Ukraine instead of using “strategic ambiguity,” because the U.S. didn’t have “the kind of troop strength and material of war in the region to be a serious threat at that point,” Sen. Mitt Romney (R-Utah) said Sunday.

“Well, there really wouldn't have been an ambiguity. We don't have the kind of troop strength and material of war in the region to be -- to be a serious threat at that point. Look, the Biden administration has done some things very well and some things not so well. The not-so-well side is, they continued the policy of prior administrations not to provide the defensive weapons Ukraine needed. That was the mistake,” he told CNN’s “State of the Union.”

“The positive thing was sharing our intelligence with our allies and combining our efforts with our allies. Look, we used to be40 percent of the world economy. Today, we're about half of that, and so for us to have the kind of economic clout we used to have back in the '50s and '60s and '70s, we really do need to combine with our allies, and that's something President Biden has done extraordinarily well,” the senator said.

Ukrainian President Zelensky announced that the Russians and Ukraine plan to meet at the border with Belarus, a decision that Romney hopes means that Putin recognizes “he made a huge error.”

“As for the prospects of discussions at the border, look, I hope and I believe that Putin may well finally recognize that he made a huge error, that he was -- badly miscalculated how hard the people of Ukraine would fight and the nature of the world's response,” the senator said.

“In this modern world, with war being conducted, and people filming it and passing it around the world, there's been a response I don't think Putin had anticipated. I hope that's what he's doing. I fear he may be trying to take Zelensky off the streets of Kyiv and, by doing so, making the Ukrainian people less willing to fight, but I hope that he's wising up to the stupidity of what he's doing," he said.

When asked whether he’s saying the meeting could be a ruse, Romney said, “Well, I think -- all things can be -- I mean, you listen to Putin in the days leading up to the invasion, he kept saying: We're not planning on invading.

“Obviously, he was lying, and so you can't trust a word that comes out of his mouth, but, at the same time, I think he may be recognizing, he should be recognizing that this is not going well for him. NATO has come together. Germany is now saying they're going to be investing far more in their military capacity. They're providing more weapons,” he said.

“The world is behind the people of Ukraine. Look at those brave people in Ireland stopping the Russian ambassador. We should be doing that all over the world, by the way. The Russia government is a pariah, and the entire world should be protesting and letting Russia know how badly they're seen on the world stage,” the senator said.

Imposing sanctions on the Russian Central Bank and removing some banks from the international SWIFT banking system was the right move, but for it to be most effective, such sanctions should be shared with allies around the world, Romney said.

“We want to all be together on this. So we can only go as fast as everybody wants to move together. So that's critical, but those sanctions will have an impact,” the senator said, adding that as Senate Minority Leader Mitch McConnell (R-Ky.) said, “you can't get the sanctions too high.”

“This is very good news, and the kind of thing we ought to be doing, and I also think consideration of a humanitarian zone, a no-fly zone to allow people to escape from Kyiv, if that's necessary, may be something that we need to consider as well, but let's keep on cranking up the sanctions against what is an evil regime,” he said.

Romney agrees with UN Ambassador Linda Thomas-Greenfield that the United States should consider getting involved in enforcing a no-fly zone against Russia, “and you may want to negotiate it with the Russians and with our allies.”

You may decide that this is something that would be done by the U.N. or by us, but, clearly, the humanitarian demand may be such that we will look for a way to allow the mothers and children that are currently being huddled in subway stations to be able to find refuge, and look at the people of Poland.

How heroic they are, providing the clothing and the housing and the food for these refugees that are -- that are pouring into their country, and also in Romania.

Here he, is in this -- this -- behind this huge table in this big white room. I mean, it looks like a mausoleum where honesty and honor have gone to die, and contrast that with Zelensky, with his courage, with his passion, with his true leadership.

This is remarkable, and it's having an impact, and I hope it makes us a better people and it makes us more committed to the principles of freedom.

Look, you recognize that, in the history of the world, authoritarianism has been the default setting, and to have freedom, it requires people to stand up and protect it, and you're seeing the terrible miscalculation by Vladimir Putin, causing the kind of commitment to freedom that we'd hoped we'd see.