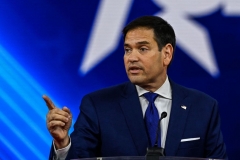 (CNSNews.com) - Sen. Marco Rubio (R-Fla.) warned Sunday that if the United States committed to enforcing a “no-fly zone” in Ukraine, it would mean shooting down Russian planes, which would start World War III.

“Look, a no-fly zone has become a catchphrase. I'm not sure a lot of people fully understand what that means. That means flying AWACs 24 hours a day. That means the willingness to shoot down and engagement Russian airplanes in the sky,” the senator told ABC’s “This Week with George Stephanopolous.”

“That means, frankly, you can't put those planes up there unless you're willing to knock out the anti-aircraft systems that the Russians have deployed, and not just in Ukraine, but in Russia and also in Belarus,” Rubio said.

“So basically a no-fly zone is -- if people understood what it means, it means World War III. It means starting World War III,” the senator said.

“So, I think there are a lot of things we can do to help Ukraine protect itself, both from air strikes and missile strikes, but I think people need to understand what a no-fly zone means. It's not just -- it's not some rule you pass that everybody has to oblige by. It's the willingness to shoot down the aircrafts of the Russian Federation, which is basically the beginning of World War III,” he said.

“How about this provision of fighter jets? We would provide the fighter jets to Poland, other Eastern European nations. They would send the jets they now have to Ukraine. Do you support that?” Stephanopolous asked.

“I do. If that can be done, that would be great. I do have concerns about a couple things, and that is sort of, you know, can they actually fly them given the amount of anti-aircraft capability that the Russians possess and continue to have deployed in the region?” Rubio said.

“By the way, yesterday was a terrible day for the Russian air force. They're losing. They don't have air control either there, but, generally speaking, it's something I'd be supportive of, and we should do what we can to help them,” he said.